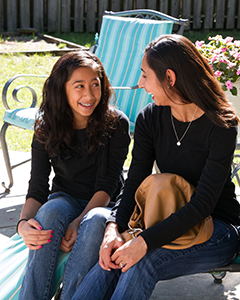 Named the number one prevention program out of 6,000 for long-term effects on substance use and misuse by Dr. David Foxcroft, Oxford Brookes University.

SFP 10-14 has been scientifically evaluated in a randomized, controlled test with families of sixth graders through Project Family at the Partnerships for Prevention Science Institute at Iowa State University.

This large-scale, experimental design trial involved random assignment of 33 Iowa public schools. Outcome evaluations entailed the use of multi-informant, multi-method measurement procedures at pretest, posttest, and follow-up data collections completed approximately one half, one and one half, two and one half, four, and six years after pretest.

Assessments included in-home videotapes of families in structured family interaction tasks and in-home interviews that included scales from standardized instruments and commonly used measures such as the National Survey of Delinquency and Drug Use. A total of 161 families participated in 21 intervention groups at eleven different schools, with group sizes ranging from three to fifteen families. Participation rates were high among pretested families. Ninety-four percent of attending pretested families were represented by a family member in five or more sessions.

What is Evidence Based?

In general, evidence based programs:

Advantages of evidence based programs:

Additional information can be found on the Partnerships in Prevention Science Institute's research projects page.

We welcome inquiries regarding research and grants, adaptation of the program, and general implementation or programming of Iowa State University’s Strengthening Families Program: For Parents and Youth 10-14.

Required materials are available for purchase to individuals who have been trained or recertified to facilitate SFP 10-14 within the last three years.

Need to verify your training date is within 3 years before ordering materials?