AMES, Iowa – Iowa 4-H members in a club show more gains in knowledge the longer they are members of a club, based on results of a survey of Iowa 4-H club members.

“The issue of ‘dosage,’ or how long a youth is in 4-H, has been discussed at the national extension level as an essential element,” said Marybeth Foster, Iowa 4-H organizational accountability manager. 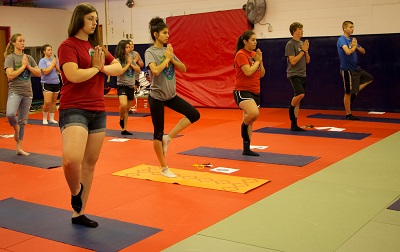 4-H is the youth development program of Iowa State University Extension and Outreach.

“The results from our three-year club survey confirm this concept does have merit. Length of time in 4-H matters to learning and development,” Foster said.

The surveys were analyzed by the Research Institute for Studies in Education at the Iowa State University School of Education. The institute partners with Iowa 4-H Youth Development to conduct program evaluation annually.

Youth were asked to indicate on a five-point scale if they had increased their knowledge in the areas of communications; learning; citizenship; leadership; healthy living; aspirations in science, technology, engineering and math; and STEM attitudes based on knowledge before 4-H and after participating in 4-H.

Iowa 4-H previously conducted a survey of club members in 2008 with 508 youth participating. The 2008 study looked at citizenship, leadership and communication.

The 2016-2018 study involved three independent samples of club members. The Research Institute for Studies in Education looked at the systematic differences over time. The effect of 4-H club membership for youth was stable over the three-year period, but high school members gained more than those in fourth through eighth grades. This demonstrates the impact of longer time or dosage in 4-H club experiences. The researchers saw a significant difference in gains each year when examining youth knowledge after their 4-H participation compared with before their 4-H participation.

This study reinforced the idea that the length of time a youth is in 4-H matters to their overall learning.

RISE did not find biases evident by gender or grade. It also looked at whether the group effect of being in a club impacted the results but did not find anything significant.

The last time Iowa 4-H did a study of member learning in clubs was 2008.

Category:
Kids and Teens-4-H
About the Authors:
4-H Youth Development