AMES, Iowa -- In Iowa, the weather in spring can be quite erratic. Recently, nighttime temperatures were well below freezing. This brings up an important question about plant survivability, according to horticulture specialists with Iowa State University Extension and Outreach.

How do plants cope when winter makes a late visit?

The newly emerged growth of most perennials can tolerate temperatures in the low 30s and upper 20s Fahrenheit. Freeze damage may occur if temperatures drop into the lower 20s or teens. Most well-established perennials that have been damaged by freezing temperatures should survive. The roots and crowns of severely damaged perennials should send up a second flush of growth in a few weeks. Good care (for example, watering weekly during dry weather) this spring and summer should help damaged perennials recover.

The developing leaves on many trees and shrubs can also tolerate temperatures in the low 30s and upper 20s. Freeze damage is most likely when temperatures drop into the low 20s or teens. Symptoms of freeze damage include shriveling and browning or blackening of damaged tissue. Damaged growth usually becomes limp. Eventually, damaged or destroyed leaves drop from the tree or shrub. 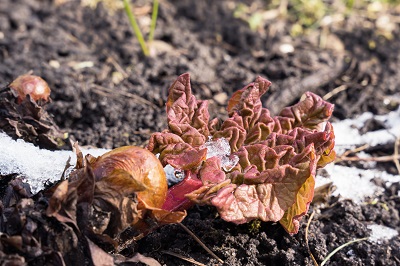 However, flowering trees and shrubs may not bloom as well in spring, as the cold temperatures may have damaged or destroyed some of their flower buds.

After freezing temperatures, some gardeners express concerns about the edibility of rhubarb. Rhubarb is a tough plant. Temperatures in the upper 20s or low 30s typically cause no damage. Temperatures in the low 20s or teens may cause visible damage. Rhubarb damaged by freezing temperatures will have black, shriveled leaves and soft, limp leaf stalks. It is safe to harvest rhubarb if the plants show no signs of damage three or four days after the freeze event. Damaged rhubarb stalks (blackened foliage and limp stalks) should be pulled and discarded. New stalks that emerge after the freeze are safe to harvest.