What is a Riparian Buffer? 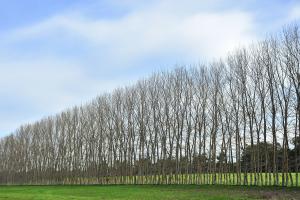 Iowa’s vast prairies created some of the most productive soil on Earth; however, modern intensive agricultural practices have at times contributed to extreme unsustainable soil loss.  Where does that soil go?  It silts in tile lines, drainage ditches, creeks and rivers; and it carries with it nutrient and chemical run-off that pollutes our water reources.  Some very simple management techniques can help to mitigate these problems, but the most effective is the riparian (stream-bank) buffer.

Is a buffer right for your acreage?  The first step is to go for a walk at your property and consider where you need to stop soil loss and make better use of your water resources.  To accomplish this, the NRCS routinely looks at reducing sediment, removing problem debris, stabilizing banks, and installing vegetative buffers; they would be happy to consult with you.  Where would a habitat addition have the greatest impact on your property?  Is there a place where a habitat addition would not only provide soil retention and create a run-off buffer, but would create wildlife travel and nesting habitat, or provide much-needed cold-weather cover?

By definition, a riparian buffer is a vegetated “buffer-strip” near a stream, which helps to shade and partially protect the stream from the impact of adjacent urban, industrial or agricultural land use.  It plays a key role in increasing water quality in associated streams, rivers and lakes and provides a greatly enhanced and varied habitat for wildlife.

The buffer creates healthier water in the streams and increases bank and overhang cover, helping to moderate water temperatures and create a more diverse array of microclimates and habitats for insects and other invertebrates, birds, fish, mammals, endangered reptiles and amphibians.  Currently in Iowa, The Nature Conservancy and a number of public and private partners are working on watershed-focused management plans that combine riparian buffers and other nutrient-management strategies with oxbow restorations that work to create landscape-enhancing reservoirs for aquatic and riparian species.

When it comes to buffers, there are many factors that determine the effectiveness of the system for any given erosion or pollution problem.  To understand these, one needs to consider that sediment and sediment-associated pollutants, (nitrogenous compounds, phosphorous and pesticides), move to surface waters primarily through surface runoff (and sub-surface tiles), and to a lesser extent, through sub-surface percolation.  To effectively remove sediment and its associated pollutants, one needs to design a buffer that sufficiently slows the runoff water to allow sediment to settle before it reaches a stream.

In the early days of our agricultural landscape, we had small fields surrounded by fencerows.  Most of these fields were not tiled and the woody vegetation and other plants and their root systems in the fencerows created above and below-ground buffers around every field.  Regular crop rotations worked to provide nutrient that was slowly released from organic matter.  With the advent of “clean farming” came the unexpected consequences of increased soil erosion, water-born nutrient and chemical run-off and wildlife habitat loss.

So today we look at ways to recreate the benefits of these earlier times through well-designed buffers and other strategies. One of the most widely recognized models is the three-zone buffer developed by the USDA Forest Service. In most situations, design decisions about the width of its three buffer zones will be a compromise between wildlife corridor, bank stabilization, and water-quality-protection ideals, and the economic reality of your land-use plan.

In the USDA Forest Service three-zone buffer, the first zone, closest to the edge of the active channel extends a minimum of 15 feet along a line perpendicular to the watercourse.  This is relatively undisturbed existing or planted woody vegetation (tree removal is generally not encouraged).   The next zone extends a minimum of 60 feet out, perpendicular to the watercourse and the first zone.  Vegetation is similar to the previous one, but removal of tree and shrub material (or agroforestry products) is permitted on a regular basis providing that the tree and shrub material is re-grown or replenished.  The final field buffer zone begins at the outer edge of zone two and has a minimum width of 20 feet.  This usually is a grassy area and can be a grass or plant community that is grazed or similarly managed as long as it accomplishes sediment filtering and nutrient uptake.  This is where the main task, conversion of concentrated water flow (washes and channels), occurs.  The grass community in the outer zone meters the water into a uniform, shallow and dispersed flow, easily processed by the plant material, its root system and biological and physical processes within the soil.

Runoff water needs to spread over or through the buffer, but water can be problematic.  It likes to form channels, and once in them, water moves almost as quickly through a buffer as it does across a field, thereby rendering a poorly designed buffer ineffective.  This use of structural practices such as level spreaders and bioreactors can enhance or protect a riparian buffer.

The level spreader is a structure that acts as a temporary catchment and diffuser that takes the initial hit for a storm-water event.  In practice, they are as complex and highly-engineered construction of rock, concrete and woven fabric, or something as simple as a cattail laden frog pond.  A level spreader is essentially a pond or ditch that acts as a catchment, these can be built with emergency overflows, but the heart of the device is a wall perpendicular to the down-slope, usually concrete.  The wall is backed by a percolation bed of stone or gravel that acts as a diffuser for the grass zone of the riparian buffer.  The structure functions by catching water, the overflow crosses the top of the wall in a thin sheet that then flows into the percolation bed.  Level spreaders are frequently employed in urban situations to divert parking-lot run off from natural waterways and divert storm-water surges.

Bioreactors usually take the form of a trench of buried woody material that creates a biologically active filter bed that receives water from a field tile or sump.  They usually incorporate diverters that evenly spread incoming water into the filter bed of the bioreactor or in extreme circumstances bypass a storm water surge directly to the waterway.  This bypass is an emergency overflow feature that prevents creation of a surface channel that would bisect and damage the integrity of the riparian buffer.

Bioreactors are a type of “bioremediation” system where natural physical and biological processes help eliminate a pollutant, usually excess nitrogen.  Most use wood chips that are buried in a trench.  Excess nitrogen from agricultural fields reaches surface water as nitrate in the ground water below the soil surface.  In order for nitrate to be removed from ground water before it reaches surface water, the ground water must enter a zone where plant roots (the riparian buffer’s grass and woody biomass root zones) are active.  These plant roots may either absorb the nitrate for use in plant growth or, more importantly, may provide an energy source for bacteria that converts the nitrate to more biologically friendly nitrite, which can then out-gas to the atmosphere or be used by plants or soil microorganisms.

This process, denitrification, occurs almost exclusively in water-saturated zones where abundant organic matter is present.  This is the idea behind the wood-chips in the bioreactor.  The surface of the chips provides an incredibly large surface-area that is a moist habitat and carbon source for denitrifying bacteria.  Bioreactor design is in its infancy, some test units in Iowa have cost $6,000 to $18,000, but government and non-government cost-shares have been readily available to interested landowners.  Other landowners have designed and built their own systems.  Research with bioreactors in several regions of the country have shown that mushroom mycelium in the wood chip beds can remediate (convert) high levels of manure nutrients and even the hydrocarbons from petroleum-contaminated soils.

The buffer can have additional value beyond the environmental benefits.  Within the inner zones of the buffer, the woody biomass can be a sustainable value-added resource.  Agroforestry is the intentional integration of trees and shrubs into crop and animal farming systems to create environmental, economic, and social benefits.  It has been practiced in the United States and around the world for centuries.  At its most complex application are the permaculture practices that integrate the highest levels of integrated land-use production with land-use protection.  Agroforestry is compatible with riparian buffers, since the middle zone can be harvested for biomass and the zone closest to the watercourse can be selectively harvested for nuts, fruit, and material for the production of “nontraditional” forest products.

As an example of a mid-zone biomass harvest, in one study, woody biomass riparian buffers that incorporated the agroforestry biomass harvest of willow demonstrated that the trees were highly effective bio-filters that intercepted and removed  nitrogen and phosphorous.  In this study, at a planting density of 4,000 willow plants/ha, data showed potential nitrogen removal over 50kg/ha/yr, while producing up to 25 dt/ha of woody biomass.  The researcher concluded that there was no evidence of serious pest or disease pressure at their test sites, and that bi-annual harvest with coppice (re-growth) was a possibility in especially nutrient-rich sites.  Other studies show similar results.  Many of the tree and shrub species used for biomass production readily coppice.  Once cut, they send up new shoots into a resulting stand that can be of greater density than its predecessor.

In Iowa, Iowa State University has conducted considerable research on riparian buffers and bioreactors.  Across the state there are projects funded by USDA-NRCS, County Conservation Commissions, the Iowa Department of Natural Resources, The Nature Conservancy, DuPont Pioneer, Ducks Unlimited, Pheasants Forever and other participants who work with interested landowners to adopt and demonstrate these practices can effectively enhance the environmental health and biodiversity of the smallest acreage.

Biomass, carbon and nitrogen dynamics of multi-species riparian buffers within an agricultural watershed in Iowa, USA