Enjoy the Light of the Firefly 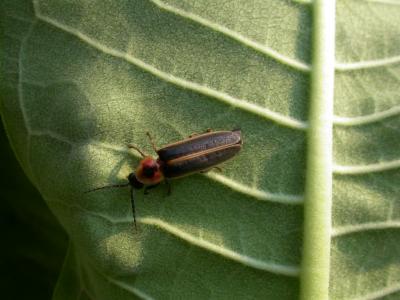 The light emitted by fireflies helps males and females find and recognize each other.

One of the pleasures of warm summer evenings in Iowa is the "fireworks" show the lightningbugs put on for free. The flashing of thousands of tiny lights above a field or prairie makes you glad to be here.

"Lightningbug" and "firefly" are two different names for the same thing. They are beetles in a specific family called the Lampyridae. There are 124 species of fireflies in the United States and Canada, mostly in the East and South. Like all beetles, the fireflies have a complete life cycle consisting of four stages: egg, larva, pupa and adult.

The adults we see now live for one to two weeks. They may feed on nectar and pollen or other insects, but most of the time is spent in the process of reproduction. The flashing lights are an integral part of the process. The lights help the males and females of the different species find and recognize each other.

After mating, the adult females lay their eggs in moist places such as in tall grass and under mulch and leaf litter. The eggs hatch yet this summer and the larvae live until next summer when they complete the transformation to the adult stage.

Lightningbug larvae are found in moist areas such as under the loose bark of dead trees, under mulch and debris and within moist, loose soil. The elongate, worm–like larvae are flattened and the segments on the top side of the back are expanded into shield–like plates that protrude slightly to the sides and to the back, overlapping the next segment.  Larvae have six legs and are usually brown. The full-grown length is about 3/4 inch. The larvae possess light organs similar to those of the adults, and their luminescence often attracts the attention of gardeners. Lightningbug larvae are active at night and are predacious; they feed on small insects, worms, snails and slugs.

Lightningbug larvae and adults produce light by an interesting reaction of chemicals and enzymes. The light produced is a "cold" light. That is, the chemical reaction produces nearly all light and very little heat. The light flashing is regulated according to a genetically fixed pattern and is used by the adults for courtship. Each species has a distinctive pattern of flashes, varying in flash number, duration, interval between flashes, motion accomplished during the flash, height of the flash above ground and so forth. The males and females recognize their own species' flash and get together as a result of the illumination. The light-producing organs are on the underside of the last two segments of the abdomen.

As spectacular and special as fireflies seem to us, they are not the only organisms capable of producing light.  Another group of beetles called the glowworms produce light at several small dots along the sides of the abdomen.  Light also is produced by certain bacteria, marine plankton or algae, krill and even fish.

As great as glowing algae might be, I would rather watch fireflies over an Iowa field. The show doesn't last long, so enjoy it while you can.

There is one photo for this week's column Lightningbug62907.jpg