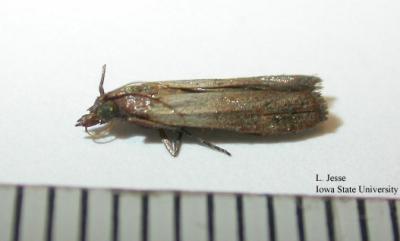 The Indian Meal Moth is the most common pest in dried flowers.

Dried flowers and other plant materials such as grapevine wreaths are a popular way to decorate the home or office. Unfortunately, natural plant products are just that: natural. And as such they can become the habitat or the food for various insect pests.

The frustration of insects devouring dried flowers and the annoyance of moths flying around the house can occur for the customer with a single arrangement, the hobbyist, or large grower or commercial operator. Insects may infest completed decorations and arrangements or the work materials in storage.

The insect pests of dried flowers are not dangerous. Their damage is limited to only those plant items or stored foods that they consume or contaminate. They cannot bite or sting, they do not carry diseases, and they do not attack the home structure. Some of the insects that attack dried flowers also attack stored food in the cupboards, but otherwise, the primary harm done by insect pests of dried flowers is the destruction of flower petals, leaves and other plant parts that are eaten by larvae.

Two common pests
The Indian meal moth is the most common pest in dried flowers. Adult moths, which may be found inside infested products or flying about the house have a wingspan of 1/2 to 5/8 inch. The base of the front wing is pale gray or tan and the outer two–thirds is reddish–brown with a coppery luster. The coloration may not be clear in older specimens.

Damage is done by the caterpillar stage. Caterpillars are off–white with shades of yellow, pink or green and up to 1/2 inch long. Infested flowers may be covered with fine silk webbing spun by the larvae. Caterpillars live for four to six weeks and often leave infested items when mature and crawl for long distances on ceilings and walls before stopping to spin a cocoon.

The cigarette beetle is brown, 1/8 inch long and oval. The head is bent downward giving the insect a strongly humped appearance.  Adult beetles may wander away from infested products but the fuzzy, yellowish–white larvae are found only in infested items.

Management
Your choice of practical control alternatives for dried flower insect pests depends on the scale of the problem. For individual, infested arrangements the best solution is usually to discard the item. If infested material is to be salvaged or if infestation is questionable, heat the item in the oven at 130 degrees F for at least 30 minutes, or place in the freezer at 0 degrees F for at least four days. This solution is limited by the amount and size of the materials.

The vicinity of an infested flower arrangement should be thoroughly cleaned. Vacuum clean all cracks and corners to pick up crawling insects and spilled or infested food sources. Discard the vacuum cleaner contents to prevent reinfestation. Washing with detergent, bleach, ammonia or disinfectants will not have any effect on insect pests.

Spraying doesn’t work. Insecticide sprays are not recommended for controlling insects in dried flowers. Sprays control only the insects they contact and have no effect on insects already inside the flowers or hidden deep in crevices. Fogging especially will have little, if any benefit. Flower shops and wholesalers have the options of pheromone traps to monitor for the presence of Indian meal moths and to have infested items fumigated by a licensed pest control operator.

Finally, small quantities of susceptible materials can be stored in sealable glass, metal or heavy plastic containers or in the refrigerator or home freezer.

There is one photo for this week's column.
IndianMealMoth122906.jpg Please credit Laura Jesse, Iowa State University, when using this photo.