The Economics of Aphids Infestations 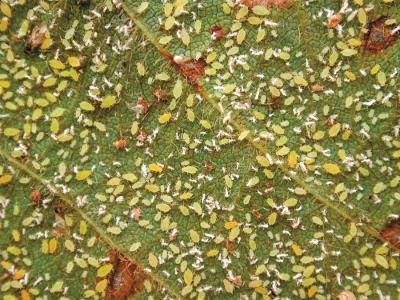 Various ages of aphids on a soybean leaf.

"Soybean aphid populations remain small throughout most of Iowa except for the northeastern corner of the state. A few fields in Winneshiek County have reached the economic threshold of 250 plants and will soon be sprayed,” said Marlin Rice, Iowa State University (ISU) Extension entomologist.

Field scouting should occur weekly until plants reach the beginning seed stage (R5) or the field is sprayed. When aphids are found, estimate the population size per plant. Count all the aphids on several leaves and plant terminal to establish what 100 or 250 aphids look like and then use this as a mental reference for gauging populations on other plants.

There are both wingless and winged forms, according to Matt O’Neal, assistant professor, Entomology. He says wingless soybean aphid adults are about 1⁄16 inch in length, pale yellow or green, and have dark-tipped cornicles (tail pipes) near the end of the abdomen. The winged form has a shiny black head and thorax with a dark green abdomen and black cornicles.

If producers find that aphids have infested their fields, there are a couple things they need to consider before having the field sprayed.

“Two concepts are very important in integrated pest management for understanding pest and yield loss relationships. These are the economic injury level and the economic threshold,” said Rice.

“I recommend producers use the 250 aphids per plant economic threshold to justify an insecticide application to a soybean field,” said Rice.

“It incorporates a 5- to 7-day lead time before the aphid population would be expected to increase to economic damage level of 1,000 aphids per plants.

“Populations that average less than 250 aphids per plant should not be sprayed. Fields with small aphid populations should be scouted every 2–3 days to determine if they reach the economic threshold,” said O’Neal.

“Heavy rains and beneficial insects may reduce low or moderate populations. Insecticides are most likely the only option for control once the population reaches the economic threshold,” he said.

Visit the Iowa Soybean Aphid Task Force Web site for the latest on the spread of this insect in Iowa and more information on how to manage this pest.