Verticillium Wilt - A Serious Disease of Trees and Shrubs 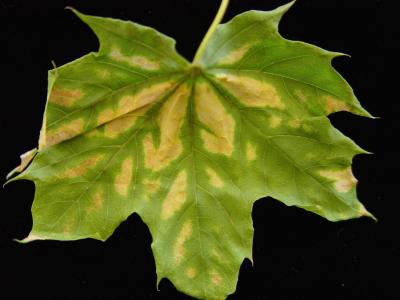 This maple leaf is exhibiting signs of Verticillium wilt.

The green, leafy branches of a maple or ash tree can provide much-needed refuge from the sun during the hot days of summer. Verticillium wilt, a common but often overlooked disease, can destroy that beautiful shade by causing these trees to wilt and die, sometimes within a few weeks or months.

Verticillium wilt is a fungal disease that affects over 300 species of plants, including many common trees and shrubs. In Iowa, it is most commonly seen on maple, ash, and catalpa trees, although it is also frequently found on smoke tree, viburnum, lilac, cherry, plum and several other trees and shrubs.

Verticillium wilt is caused by a fungus that lives in the tiny tubes (xylem) that carry water through the tree. The fungus essentially blocks these tubes, preventing water flow and causing the plant to wilt. The fungus also produces toxins that poison the plant.

The disease can occur either acutely or chronically. In acute infections, a branch or a section of several branches of the tree may wilt and turn brown rather suddenly. Often other branches soon follow, until most or all of the branches are wilted. Leaves may also turn yellow between the veins, or may drop prematurely. Branches may die back. Acute infections occur when the fungus is living in the newest wood (the sapwood).

In chronic infections, leaves may be smaller than usual or yellow, often with brown edges. The tree may grow poorly and may produce abnormally large seed crops. The tree does not wilt or die quickly, but declines slowly over time. Chronic infections occur when the fungus is living in older wood.

The Verticillium fungus lives in the soil and infects plants through the roots, often entering through wounds, such as wounds that naturally occur as the roots grow through the soil. The fungus survives in the soil as a thread-like body called a mycelium and as microscopic, dark, resistant structures called microsclerotia. These microsclerotia can survive in soil or dead plant material for up to ten years. For this reason, it is virtually impossible to eradicate the fungus from the soil.

The Verticillium fungus is abundant in many soils, and we do not know why it can lay dormant for many years before suddenly attacking a tree that has been growing in a spot for a long time. It is possible that stresses to the tree, such as a drought or living in poor soil, can make it more susceptible to infection.

There are no treatments available to remove the fungus from the soil where it survives. Management relies on keeping trees in good vigor. Trees with recent wilt symptoms may be able to section off (compartmentalize) the infection themselves and recover.

There is no need to quickly remove infected trees, as the fungus lives in the soil and does not spread through the wind. Dead branches should be pruned out to prevent infection by other fungi and to improve the appearance of trees with chronic infections.

A high resolution version of the photo is available 62405VerticilliumLeaf.jpg