DES MOINES, Iowa – When it comes to education, Patrick Schmitt knows people learn in a lot of different ways. He is most familiar with the learning that takes place at the Discovery Garden on the Iowa State Fairgrounds.

Schmitt, a co-chair of the Discovery Garden, dedicates 40 hours a week to the one-of-a-kind Iowa “outdoor classroom.” He also coordinates volunteers, trained by Iowa State University Extension and Outreach through the Master Gardener program, to care for and teach in the Discovery Garden during the Iowa State Fair.

Schmitt and fellow Master Gardeners gain a wide base of knowledge, but they never stop learning from each other or those around them.

“It’s just amazing how knowledgeable people are,” he said. “We’re constantly learning from one another with our niches of expertise that we share with each other. It’s not like you go through the program, you’re done, you know everything. You learn something every day.”

The Discovery Garden is a prime example of how the Polk County Master Gardeners – and Iowa State University Extension and Outreach – serve and give back to Iowans through education and engagement.

This summer, the Discovery Garden has undergone $70,000 in improvements and upgrades. A repaved sidewalk connects Pella Plaza and the Ag Building and 5,000 square feet of garden pathways have been paved with a permeable surface called FilterPave that promotes urban conservation. Thousands of visitors will enjoy these improvements as they explore the garden during the Iowa State Fair Aug. 11-21, improvements made possible by  grants from the Iowa Department of Agriculture and Land Stewardship, the Gabus Family Foundation, Polk County Board of Supervisors and the Iowa State Fair Blue Ribbon Foundation.

It is the latest effort by the Polk County Master Gardeners to turn what was once a small garden into a showplace. 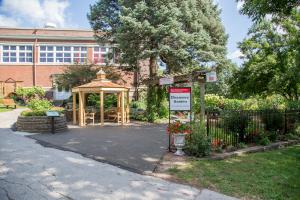 Gardening is a lifestyle

The Discovery Garden began in 1983 as a small bed of annuals called “The Children’s Garden” planted on the south side of the Agricultural Building by the Des Moines Men’s Garden Club.

In the mid-1990s, the Polk County Master Gardeners took over the project, and they’ve developed it ever since.

For the Master Gardeners, the Discovery Garden is more a lifestyle than a mere hobby. They contribute 4,000 volunteer hours per year, working year-round on the project while growing plants, coordinating volunteers and making sure everything is ready for the fair.

“No sooner do we get done with the State Fair than we’re asking all garden bed team members for a concept, an idea of what to do next year,” Schmitt said. “In fall, the seed ordering takes place for the plants we’re using (in the garden).”

Schmitt and the other co-chairs are at the garden at 6:30 a.m. daily, watering and tending to plants. He says it’s a 40-hour-per-week job beyond his work at a local greenhouse.

“I like the creative part of it,” he said. “I just like living things and I can’t help but walk into a greenhouse and everyone’s in a good mood. We have a lot of questions and I love talking about my own garden and chatting with people.” 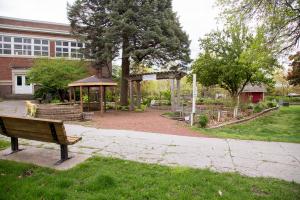 The garden is open year-round, and while it’s very popular during the State Fair, it finds plenty of use even without fair crowds.

“It’s a very peaceful place outside of the fair,” Schmitt said. “It’s amazing how many people come out daily, walk through the garden. We have older ladies who stop to pray in the mornings. It’s so peaceful and it’s lovely having nature there. It makes you feel good.”

Those who make their way to the Discovery Garden this summer will see an all-around improved atmosphere thanks to the renovations.

A Master Gardener group trip to a public garden in St. Louis led to inspiration.  Unlike traditional surfaces, a permeable surface allows water to infiltrate into a layer of rock and move into the soil or a subsurface drain. That filters out pollutants, stabilizes stream flows and reduces flood potential during storms. At the Discovery Garden, the new permeable surface also can be part of the classroom experience. 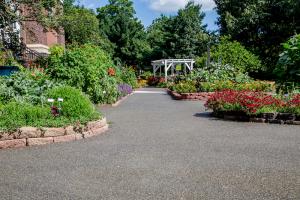 “I think the biggest thing about this project is the demonstration aspect of it,” said Jennifer Welch, urban conservationist with the Polk County Soil and Water Conservation District. “Putting a project in a visible location like this with people who are ready to tell a story and do education on the plants, and in this case the storm water features, really made it very interesting to the group.

“The changes are dramatic as far as the safety and the new look for the garden. There’s a lot of good awareness. It’s going to look and feel different, too.”

All of the foot traffic that the garden receives – especially during the fair – highlighted the need for improvements. The crushed-brick pathways were difficult to manage following rainstorms, particularly for those in motorized scooters or using walkers.

“The sidewalk was in bad shape,” Schmitt said. “People were falling, although nobody was seriously hurt.”

The FilterPave installed in the Discovery Garden is made up of regionally crushed stone and 45,000 recycled colored glass bottles, bonded with a plant-based polymer. It reduces runoff and water pollution from rainfall. 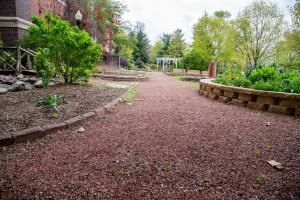 They also can keep water in Iowa’s soil and groundwater tables, rather than sending it directly into streams where it will eventually flow into the Gulf of Mexico.

“(The Discovery Garden) is very small-scale, and it’s not a significant reduction in the volume of runoff and pollution loads,” Petersen said, “but I think it has significant educational value. You think about parking lots, roads, highways – how many you could retrofit to permeable surfaces. It’s a baby step but an important step.”

“The Master Gardeners who volunteer at the Discovery Garden are helping to address the issue of water quality,” she said. “The permeable pavement at the garden will help to increase water retention.”

Urban fairgoers exploring the garden’s permeable pathway will be able to connect their city landscape with the greater Iowa agricultural landscape.

“Iowa has a lot of urban people who are disconnected from agriculture. When I grew up, kids rode the school bus from farms or would go home with farm kids on weekends or have relatives that farmed. That’s less and less common. My kids didn’t know any farmers, didn’t spend time on farms. They’re isolated and disconnected from the ag industry. Yet you drive for 15 minutes in any direction, and you’re surrounded by agriculture,” Petersen said.

This August and beyond, the garden will be a teaching ground for agriculture and the Master Gardeners’ work at large.

“They really worked hard at this garden to make this happen,” Welch said. “It wasn’t a super-easy process for them with many levels of ownership and oversight. I commend them for how hard they worked to make this project a reality. The mission of Master Gardeners is teaching and beautifying, and providing education is an important benefit.”