Producers and Iowa Benefit from Forage and Pasture Education 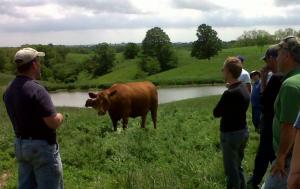 Current trends in agriculture are forcing Iowa beef producers to raise more beef from fewer forage acres. According to the USDA Census of Agriculture, nearly 20 percent of Iowa pasture land was converted to cropland from 2002 to 2007. High grain prices from 2008 to 2012 have continued or accelerated this trend.

Beef producers must improve productivity of the available pastures through better management to increase beef production per acre of land. Producers say forage and grazing educational programs offered by beef specialists with Iowa State University Extension and Outreach are making it possible to do just that.

From 2007-2012, nearly 1,100 beef producers across Iowa attended more than 120 pasture and grazing programs sponsored by ISU Extension and Outreach. When participants were surveyed, 70 percent of respondents said they improved the amount of beef produced per acre of forage by at least 20 percent; 12 percent improved their beef production per acre by 50 percent or more.

On average, the respondents attended three educational events over five years and, as a result, made changes in their operations:

Putting such actions in place improves productivity and is an incentive to keep marginal land in forage production. Producers said the practices they implemented as a result of the programs had provided a median economic value of more than $1,000 per operation. Increasing forage production on marginal land benefits the producer AND the rest of Iowa. It improves economic activity in rural Iowa when forage acres are more profitable, and reduces soil erosion and improves water quality when grasslands are well-maintained.

For more information about forage and pasture education contact: