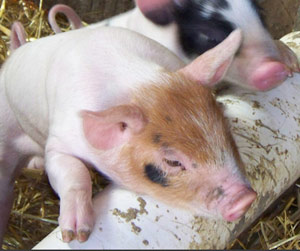 With a collapsing hog market more than a dozen years ago, Iowa pork producers were searching for ways to expand their markets and return profitability to their enterprises. So Iowa State University Extension and more than 20 organizations and 40-plus cooperatives and businesses formed a partnership called the Pork Niche Market Working Group.

“Producers were looking for a way to get more retail dollars for their pigs,” said ISU Extension swine program specialist Dave Stender, who has been working with the group since its inception. It was a natural fit for ISU Extension to be a key partner.

“The group, itself, was great for networking and sharing ideas,” Stender said. However, “the group really needed … some people that knew producers, the problems that producers are having, and the ability to bring university research back to the field level and apply it.” Extension provided the necessary “feet on the ground” and a mentoring relationship, Stender said.


Pork Niche Market Working group is a catalyst for our success. Never underestimate people power and what can be accomplished by working together.

“It’s not like they were out there sorting lines or loading up pigs. But they were teaching us what we can do and how we can do it better,” said Kelly Biensen, founder and general manager of Eden Farms. His was one of the first niche companies to participate in the working group, and he has been a champion for the group ever since.

“It evolved into, basically, producers talking to each other and learning from each other. To me, that’s one of the great functions of the pork niche marketing group … it’s about farmers communicating and figuring out what we can do together to make things work,” Biensen said.

For example, as a small niche company, Eden Farms was sending out a lot of products LTL — less than load. Another company in the group was “sending out a little more product but their trucks weren’t full – so we teamed up with that company and we saved $18,000 as a result of the communication we had,” Biensen said.

“Pork Niche Market Working group is a catalyst for our success,” Biensen added. “Never underestimate people power and what can be accomplished by working together.”

For more information about the Pork Niche Marketing Group contact: