MogoOrganic Uses Extension Resources to Do It the Right Way

A summer side job to help pay off students loans turned into a full-time career for a young Mount Pleasant woman, with Iowa State University Extension’s help along the way. 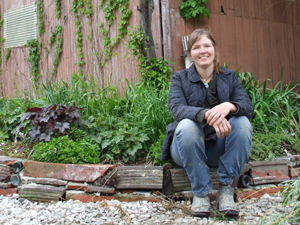 Morgan Hoenig is owner of MogoOrganic, an organic vegetable and fruit farm, located just outside of Mount Pleasant. Hoenig grew up in the greenhouse of her parents’ floral shop, but during college had aspirations of world travel, not soil tests and fixing tractors. However, she put her love of gardening to use one summer to help pay off loans by selling handfuls of tomatoes at the local farmers’ market.

Hoenig’s interest in organic farming and community-supported agriculture (CSA) started with a conservation course in college, and she continued to get more involved in the farmers’ market after that first summer. When the local chamber of commerce held a business plan contest, she entered an idea for an organic CSA farm. Hoenig won the competition, which included matching her with mentor Marsha Laux, ISU Extension value-added agriculture program coordinator.


“Extension has played a pretty big role; I wouldn’t know half the people I know had I not had the extension office and the different resources. It's just like everybody I’ve worked with through the Extension office has been very positive, and nothing beats encouragement like that.”

“She helped me with the business plan; helped me to organize my thoughts a little better,” Hoenig said of Laux as a mentor. “She was a really good resource and gave me the names of other people (to contact).” 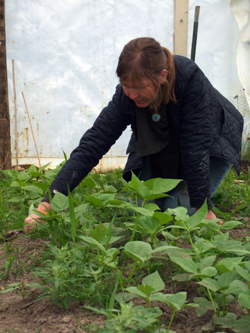 Laux started by helping Hoenig formalize her business plan, look at market potential and focus on profitability. Laux also started pointing Hoenig toward resources that would help her in her everyday activities.

“There are a lot of information resources she can find online,” Laux said. “When ISU Extension was developing its value-added ag office, we saw that there was a need for young entrepreneurs or maybe older entrepreneurs who were looking at a value-added ag business. I tried to find, first of all, through extension, what resources we had that would help her make better decisions.”

Some of the resources Laux pointed Hoenig to included crop profiles, market potential reports and case studies of similar businesses. Laux also helped Hoenig get in contact with appropriate people for her organic land certification.

The Henry County Extension office, Hoenig’s local office, aided her in her endeavor with support, resources and experts, such as Patrick O’Malley, commercial horticulture specialist. Hoenig also got involved with the Master Gardener program, which helped her learn more about topics such as organic-specific practices, weed control, soil testing and pest management. “That was a unique experience. It was really neat to get to go take those classes and learn from professionals up at Iowa State,” she said. She said the program was also a great networking opportunity so she knew who could answer her questions and she could meet like-minded people.

In just a few years, Hoenig has turned her card table and handful of tomatoes into several tilled acres full of a variety of vegetables, as well as several acres of wild blackberries, dozens of blueberry and raspberry bushes and pear, apple and cherry trees. In addition to her CSA customers, Hoenig is also selling to local businesses and continues to be a presence at the farmers’ market, which she said Henry County Extension has helped to promote. She also hosts school tours and other groups, and even had President Barack Obama and Secretary of Agriculture Tom Vilsack visit her farm in April 2010 as part of an Iowa tour.