Extension Is Family for DeJongs

AMES, Iowa – Mackenzie DeJong had two clear ideas about her career growing up.

“I’m the type of person who said, ‘That’s what my parents are doing,” she said. “That’s not what I want to do.”

So, of course, Mackenzie is now a human sciences program coordinator with Iowa State University Extension and Outreach, based in O’Brien County. How did that happen?

Turns out, following her father, Joel, into the “family business” was a natural thing – and both are excited she’s blazing a path for a new generation of DeJongs in ISU Extension and Outreach.

“It’s a lifetime thing for me,” she said.

For Joel, it’s a proud event, and a reminder to never say never.

“She said she’d never teach. She’d never be in extension,” he said. “She’d do something different. And now she’s teaching adults in extension.” 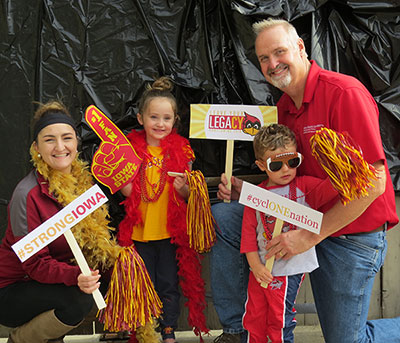 Extension As a Lifestyle

For Joel DeJong, extension is a lifestyle. Growing up in Sioux County, he was involved in 4-H, following the lead of his older siblings. His father owned a farm and retired and sold the farm when DeJong was a sophomore in high school, but always used the local extension office for answers to his questions.

He graduated from Iowa State in 1980 and took a job selling swine breeding stock, but didn’t enjoy the work. DeJong had a contact with ISU Extension and Outreach, and became the Adair County extension director from 1981-85, later moving back to northwest Iowa in the Woodbury County office. In 1992, following a reorganization, he became a field agronomist, but extension has influenced all areas of his life.

“When I started growing my family, working for ISU Extension and Outreach, I used extension information on family decisions and worked with farmers in all sorts of ways,” DeJong said. “My wife was a 4-H leader for many years, and she comes from a family where her mom, grandma, the grandkids, nieces and nephews were all involved with 4-H, four generations. We have connections all those years and we worked with extension and were volunteers in the 4-H program.”

In his current position, DeJong takes research-based information and puts it in the hands of crop producers, holding educational sessions on pesticides, working with the Crop Advantage Series and holding farm demonstrations while collaborating with other government agencies and partners to share that information. No two days are really the same, he says.

“I spend some time doing in-field research on improving crop production practices. I’m a trouble-shooter. If something’s going wrong and they can’t figure it out, they call me,” he said. “I get a lot of calls in the summer. I’m used as a resource, and can show what research shows is the answer.”

DeJong has built credibility as a trusted resource for both farmers and news media, making numerous appearances on local television and radio stations – even though he downplays them with his family.

DeJong’s oldest daughter is a stay-at-home mom and mother of three who lives on an acreage with sheep, which Joel naturally helps with as a side project.

“He tends to just show up without calling and saying 'I’m coming over,'” Mackenzie relays. “(One day) my sister is doing a bunch of stuff and heard his voice and thought, ‘Oh my gosh, Dad came in and I didn’t know he was coming today.’ She walks in the living room and realizes he wasn’t there – he was just on TV.

“When we least expect it, we hear his voice. People say, ‘Your dad’s on TV all the time. We never see him there because we don’t know, but that’s OK.”

“I catch grief about being on TV, it happens so often,” Joel said.

With extension having such a presence in the DeJong household, however, it was probably natural that it would influence Mackenzie’s lifestyle, too.

She initially attended Iowa State to major in graphic design, but switched to family and consumer sciences as a junior.

“I didn’t know what to do with it,” she said, “but that’s the path I wanted to take. People in my classes kept saying Extension was an option and I explored it and wondered what other things I could do with my major.”

Once Mackenzie took part in the ISU Extension and Outreach Rising Star internship, she was hooked.

“I couldn’t stay away,” she said. “I knew after my internship, I wanted to be in extension, I just didn’t know exactly which area.”

Following graduation, ISU Extension and Outreach Region 1 Director Cheryl Heronemus (who also administers the Rising Star program) had an opening as a human sciences program coordinator, and Mackenzie was sold.

“I jumped on the opportunity,” she said.

She covers Lyon, Sioux, O’Brien and Osceola counties with family life, family finance, and nutrition and wellness disciplines, putting together promotional materials, coordinating county and regional-level events and working to promote and put on programming.

“I love having the opportunity to kind of do what I want to do, within the realm of human sciences,” she said. “I meet amazing partners and people I get to work with, and I’m creative about how I go about implementing programming. That’s my favorite part -- to be creative in how I’m promoting things.”

Although both are based in northwest Iowa, the DeJongs rarely cross paths in the extension world, with Mackenzie saying it’s happened “only a handful of times” so far.

But Joel is very proud of his daughter’s path, telling her after she was hired, “Welcome to the family business.”

“It’s an unspoken confirmation,” he said. “You think that perhaps the work you’ve done all your life has value. Kids want their parents’ approval, and parents want their kids’ approval.”

For Mackenzie, it’s a realization that she’s right where she’s supposed to be.

“I didn’t even realize what I was doing, but somehow ended up there anyway,” she said. “I’m extremely grateful that I happened to fall into it, even though I resisted for so long.”