4-H has many project areas that are fun to do alone or with friends. 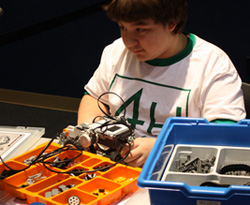 Elizabeth Rankin, age 14, and Payton Van Beek, 13, are very excited about their experiences with “electro-virus,” the Sioux Center robotics 4-H team. Their enthusiasm goes beyond their team winning the robot competition and the overall champion award at a recent FIRST® LEGO® League (FLL) championship event. Not only did the electro-virus robot score the highest number of points at competition, but the team had tremendous scientific support during the research phase before going to the actual tournament.

“It is really satisfying to see how all the hard work has paid off,” added Van Beek.

FLL, directed by Iowa State University College of Engineering, is one way ISU Extension 4-H helps kids get excited about science, engineering and technology – and teaches them valuable employment and life skills. Youth work alongside adult mentors in their community to design, build and program autonomous robots using LEGO Mindstorms® technologies and create an innovative solution to a problem as part of their research project. After eight intense weeks, their efforts culminate at high-energy, sports-like tournaments.

Gail Castillo’s son was ready to quit 4-H, until he attended a FLL competition, and he was once again hooked.

“He went with me to the state tournament and was amazed. I also didn’t think my 10-year-old daughter would like it, but she loved it,” said Castillo, a 4-H youth development specialist with Iowa State University Extension. “FIRST LEGO League truly appeals to all types of kids and all ages.”

The robotics competition continues to gain rapid interest and support in 4-H clubs and counties across Iowa. Involvement in Harrison County alone jumped from three teams two years ago to seven last year. Overall, more than 30 Iowa 4-H clubs and teams are based on robotics, many involved in FLL.

..this program is developing the future leaders for our industry. Through this contribution, our company can help 4-H make a difference in educating the workforce of tomorrow.

Community organizations and business see the value of 4-H robotics and are joining ISU Extension to encourage involvement. The Iowa 4-H Robotics Challenge held at the Iowa State Fair, now known as the Bratney 4-H Robotics Challenge, received a five-year sponsorship from Bratney Companies in 2010. Bratney Chief Operating Officer Paul Brown said, “We are making this gift to 4-H because this program is developing the future leaders for our industry. Through this contribution, our company can help 4-H make a difference in educating the workforce of tomorrow.”

During the research portion of the 4-H robotics and FLL experiences, kids have an opportunity to think of tangible ways they can 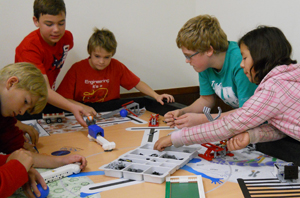 make an impact and difference in their communities. That, coupled with the designing and building a robot, gives the kids a sense of ownership in what they’re doing and in regard to each other, as they learn how to find their personal role on the team and value other’s roles as well.

“Ironically, some of the best things they learn have nothing to do with robotics. They really aren’t a team at the beginning, but it’s amazing to watch the transformation,” Castillo said. “They learn to communicate and listen to each other’s ideas, and they have so much fun together that sometimes they even forget what they were doing.”

The excitement and enthusiasm of the kids and parents who participate in 4-H robotics, or help lead and coach, has continued to spread throughout Iowa and is the reason so many new teams have sprouted up each year.