URBANDALE, Iowa – In the last 30 years, much has changed for Iowa Concern, but many things remain the same.

Rich Miller-Todd knows this well. A Congregational minister who is co-minister at Berwick Congregational Church, Miller-Todd has worked at Iowa Concern as a hotline counselor for most of the last 30 years, and continues that role today.

“I just happen to be the old guy now, when I was the young guy (back then),” Miller-Todd said recently.

After originating during a statewide farm crisis 30 years ago, Iowa Concern has grown to embrace all Iowans. Today, Iowans can call counselors like Miller-Todd at 800-447-1985, 24 hours a day, seven days a week to discuss tough issues facing their communities, their families or themselves. 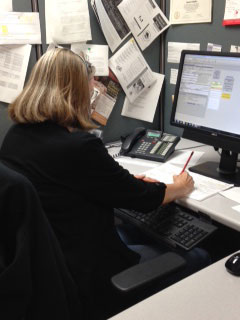 Iowa Concern serves as one of the most important resources that Iowa State University Extension and Outreach, which has administered the program since 1985, offers Iowa citizens. It has served the state’s citizens through numerous crises including the Great Floods of 1993, the Missouri River floods of 2008, drought, the H1N1 crisis and the current avian flu crisis. It has grown to include stress counselors, a website and live chat features.

However, as Iowa Concern marks its 30th anniversary, its main goal remains the same: to assist Iowans in distress and explain options. It continues to look for new ways to improve its reach and connect with new populations.

In 1985, the state of Iowa was in the throes of a major farm crisis. Across the Midwest, farm land values had dropped by as much as 60 percent, leaving farmers unable to pay their bills and throwing farmers and rural banks alike into bankruptcy.

In Hills, Iowa, a farmer facing huge debt killed a banker, another farmer, his wife and himself, illustrating the issues many rural residents faced.

“The stress was out there,” VanGinkel said. “Because of the economy, the farm community was having a very hard time.”

Miller-Todd said the farm crisis was a difficult time for Iowa.

“There were disasters going on, shootings, we saw a real negative side of that,” he said. “It was a real intense time for bankers and I saw a coming-together with a lot of different organizations trying to assist people.”

A number of organizations including the Iowa Farm Bureau and the United Way, as well as multiple farm-related organizations, told Gov. Terry Branstad and the Iowa Legislature that farmers needed a place to discuss their problems and get referrals for potential issues.

Thus, the hotline Rural Concern was born, with funding coming from a line item in the state budget. It gave farmers crisis counseling but also offered legal advice, discussing matters like mediation in foreclosure and what their rights really were.

As the farm crisis eased, funding was threatened, but Iowa State University Extension and Outreach absorbed it into its budget and made it one of its programs.

The Great Floods of 1993 devastated Iowa and surrounding states, causing over $15 billion in damages in the Midwest. The Des Moines Water Works was inundated with floodwaters from the Raccoon River, knocking it offline for 12 days and leaving 225,000 people without drinking water for 19 days – the largest population ever to suffer such a hardship.

“Sometimes people were confused about what Rural Concern (covered),” said VanGinkel, who has been with the program since 1989. “We decided in 1993 when the floods hit Des Moines, that was urban. (We) were asked to take calls for the floods. We said, ‘Let’s call it Iowa Concern. That way people won’t question it and anyone can call.’”

Stress counseling has become a crucial part of Iowa Concern’s mission. If a person has issues that he or she simply wants to talk through, Iowa Concern is there to help.

Callers also can ask about legal issues, with help from attorney John Baker and a rotating group of law students from Drake University’s law school. Twenty-five percent of calls to the hotline concern legal matters, from contracts to home-buying issues to other matters like divorce and landlord-tenant issues and the agriculture “fence law,” which deals with rural land borders. The attorney and the students can’t represent callers in court, but can explain the matters and provide legal education about the caller’s concern.

ISU Extension and Outreach’s 100 county offices often refer clients seeking further resources to Iowa Concern for assistance and guidance. The hotline also finds itself as an indicator for larger societal problems, well before they pique a wider radar. Several years ago, calls started coming from grandparents who had become guardians for their grandchildren after being abandoned by their parents.

“It (grandparenting issues) wasn’t on the radar yet,” VanGinkel said, “but about a year later people were running into all kinds of issues with their grandkids (statewide).”

Miller-Todd says Iowa Concern has a natural connection with the state and its people in numerous ways.

"As a clergy person I’ve always been very surprised by how much extension has an ear to what the church is doing,” he said. “Getting resources to people, in lots of ways it felt like a natural fit."

Walk through Iowa Concern’s call center on an average afternoon, and you’ll see a hub of activity filtering in from a number of different sources. The Iowa Concern line isn’t the only hotline managed here. An operator can receive a call from one of several hotlines contracted here, including 800-BETS OFF, Healthy Families and Teen Line. In addition, it serves as a 211 call center for 23 Iowa counties.

Operators must be versatile and nimble. During the current avian flu crisis, they had to learn quickly in order to capably answer the calls which flooded in (100 in a two-week span). When a disaster like the Parkersburg EF-5  tornado hits, Iowa Concern becomes a clearinghouse for information and volunteers in the immediate aftermath and offers crisis counseling for a year to 18 months afterward. When there are federal and state disasters, such as the floods of 1993 and 2008, it is an extended resource for those facing uncertainty and a trusted partner for local and state officials to spread sound, proven advice.

Crisis also can be an opportunity for education. Many callers asking about the avian flu are nowhere near its concentration in northwest Iowa, but were asking if chicken and eggs are safe to eat. VanGinkel tells her operators that it’s an excellent time to teach food safety and how to properly handle chickens and eggs.

“That has nothing to do with the avian flu,” she said, “but people are open to that.”

Evolving with the changing digital times is a priority, too.

Iowa Concern offers online chat with operators 24/7, and is also expanding into social media. Texting, particularly with TeenLine, is the next frontier.

“That’s been the biggest concern,” VanGinkel said. “How do we keep up with all the new technologies?”

That said, there’s nothing better than the human voice – and knowing that you’ve helped someone along the way.

"We don’t hear a lot of feedback, but when you do hear feedback that you’ve helped someone, you think, oh boy, they did find a resource or used what the attorney told them, they were very pleased with what we’ve done,” she said. “Hearing those success stories is really rewarding to me.”