As the wet rainy summer continues, disease pressure continues to be high. As noted in a May 15th blog post, dollar spot has been extremely active this year. Leaf Spot has also been lingering across the state for 2 months. Leaf spot is an ascomycete fungi caused by Bipolaris spp. and/or Dreschslera spp. A majority of the damage recorded to this point has been on Kentucky bluegrass lawns, athletic fields and golf course rough, but symptoms on bentgrass fairways/greens have also been seen. Please refer to earlier posts for symptoms, pictures, and control options.

In addition to the leaf spot calls, I have received several regarding Rust (Puccinia spp.). I first noticed rust at a Kentucky bluegrass sod field in the Des Moines metro about two weeks ago. It usually begins to show up about the first of August – mid September, however, in the last two years rust has showed up in early to mid-July. While several fungicides control rust, I usually do not recommend chemical treatment unless it is on high-maintenance areas. Furthermore, rust is usually a sign of relatively low nitrogen, and the addition of nitrogen and regular mowing will help in the removal of the disease. The yellow to orange flecks on the leaves and stems can be used to easily identify rust. As the disease progresses, orange and cinnamon colored blisters and pustules form. Clouds of spores can turn your shoes orange (as seen below in the pictures from Larry Ginger) when walking through perennial ryegrass or Kentucky bluegrass heavily infested with rust.

As mentioned in the previous post by Nick Christians, summer patch (SP) reports are also coming in. A majority of the SP damage occurs between June and September on Kentucky bluegrass/annual bluegrass.  It is known as one of the “frog-eyed” diseases.  In mixed stands of grass, the symptom patter is more irregular. The best way to identify SP is by the sparse, dark colored runner hyphae on the outer surface of the roots. The infected roots are unable to supply adequate water to the turf causing the appearance of moisture stress.

Furthermore, SP survives winter as mycelium, and begins colonizing roots between 68-90oF. The fungi spread along roots and rhizomes from plant to plant. Summer patch damage is often large because it can spread long distances through aerification and infected sod. Often recovery is slow, since new roots are inhibited by high soil temperatures. Hot, wet weather, compaction, high pH soils, low mowing heights, south facing slopes, and the use of soluble fertilizers increase the risk of SP. Summer patch is most severe in 2-5 year old turf established from sod.  Severity can also increase when “muck soil sod” is placed on native Iowa soil.

Several curative and preventative fungicides are labeled for control. Applications need to begin early in the spring, when soil temperatures reach approximately 64 oF. Repeat application 2-3 times in 21-28 day intervals through mid-August. Once symptoms of SP appear, it is often too late for fungicides. Curative fungicides have proven to be inconsistent and cultural controls are the most effective option. Summer patch research has observed the best control using combination products containing DMI’s and strobilurins. DisarmTM, HeadwayTM, and ArmadaTM are a few of the chemical trade names that fall into this category. Other products such as fluxapyroxad, propiconazole, myclobutanil, thiophanate-methyl, trifloxystrobin, and triadimefon are labeled for summer patch control.

When summer patch symptoms appear, it is most cost effective to control culturally. Foliar spoon-feed applications of ammonium sulfate at 0.1 -0.3lbs./N/1000 sq. ft. can briefly reduce severity. If foliar feeding is not an option, use slow release products rather than high rate applications of soluble nitrogen fertilizers. An annual spring application of magnesium sulfate may also reduce summer patch issues.

In addition, raising the mowing height during high stress periods will reduce disease pressure. It is prevalent in compacted soils, so improving internal drainage through core aeration, and deep-tine aeration will help. If summer patch is an annual problem, consider overseeding resistant varieties. If battling summer patch exclusively Barvette, Nuglade, Midnight, Impact, and Sky are just a few of the Kentucky bluegrass varieties less susceptible.  Additional pictures from Doug Watt at West Marshall High School can be found below. 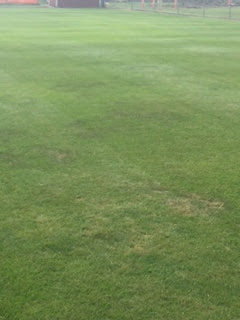 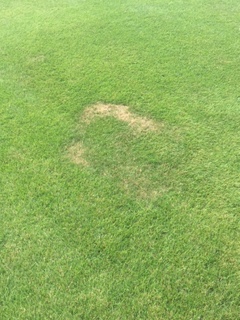