It looks like the big winner (or loser depending on your perspective) this winter was perennial ryegrass (Lolium perenne).  We use this species in the Midwest on some golf course fairways and a large number of sports fields. It is also often included in lawn seed mixes.

Perennial ryegrass has good wear tolerance and germinates very quickly in spring and fall.  I find that I will get germination from perennial rye weeks early than I do from Kentucky bluegrass (Poa pratensis) in spring seedings.  It also matures quickly, and recovery from winter damage takes place much faster than from spring seedings of Kentucky bluegrass.  On golf course fairways and tees, we can get the playing surface back in a few weeks from rye seedings, whereas it can take months for Kentucky bluegrass to provide a complete cover from a spring seeding.  We generally seed the rye at 3 to 5 lbs/1000 ft2 in mid-April.  If you had damage on rye this spring, I would recommend seeding as soon as possible.  If you are planning to overseed Kentucky bluegrass, you will likely see little germination before mid-May and then recovery will be painfully slow unless you cover the area with tarps to speed the process.

We had one of the coldest winters in years in 2014, as Ryan and myself have mentioned in blogs over the past 3 weeks.  We have had a few contacts about loss of Poa annua on golf courses, although it does not appear to be very bad in most of Iowa.  Creeping bentgrass (Agrostis stolonifera) damage appears to be minor as of mid-April.   There is also a little damage on Kentucky bluegrass, although that will generally recover from rhizomes in years like this.  Perennial ryegrass is another matter.  We are just beginning to get contacts about rye damage.  The pictures below are form sports fields and golf courses in central Iowa.  This is further south than we normally see winter damage on this species, which makes me wonder how much damage we are seeing in northern Iowa and southern Minnesota.

Perennial rye does not have a rhizome system like Kentucky bluegrass and generally requires overseeding in the spring when damage occurs.  The good news is, you can get it back much more quickly than other species (see the pictures from Vennker Golf Course on Iowa State University campus from 2008).

Let me know if you are seeing winter damage on your area and send me some pictures as well.  It will be interesting to watch recovery as the spring progresses.

The first 4 pictures are from Jester Park golf course in Central Iowa.  These are mostly ryegrass fairways with a little Kentucky bluegrass mixed in. 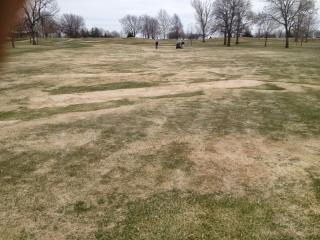 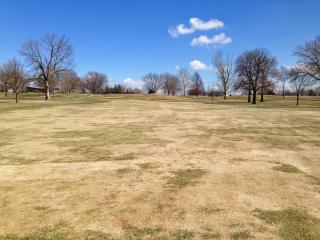 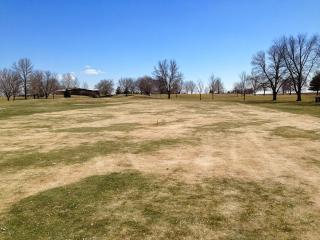 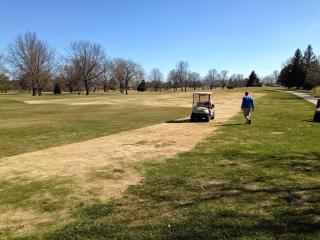 These pictures were taken on a mostly perennial ryegras soccer field on ISU campus.  Notice the mole run in the first picture.  Thanks to Brent Cunningham for the pictures. 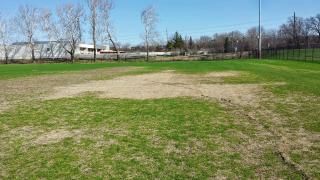 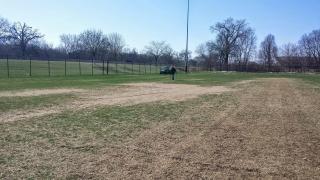 This set of pictures is from John Newton, certified golf course superintendent at the university golf course.  It shows winter damage on his ryegrass fairways in 2008.  The area was seeded with 3 lbs rye per 1000 sq ft on April 10.  The second row of pictures show flood damage in May with recovery by the end of the summer.  John had a tough year in 2008. 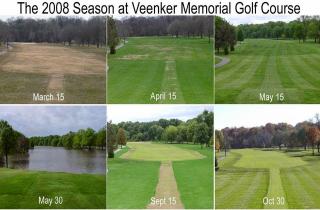