If your lawn went from one of the best in the neighborhood to one that resembled a straw field seemingly overnight then we may have an answer for you. Ascochyta leaf blight causes a rapid straw to bleached appearance of the leaves primarily on Kentucky bluegrass and to a lesser extent on perennial ryegrass and tall fescue. Home owners want to know why this happened only to their lawn and not to the neighbors. This is the most wide spread outbreak of Ascochyta that I have seen in my 30 years of managing turf. The good news is that Ascochyta spp. primarily attack turfgrass leaves and lawns usually recover quickly.

The damaged lawns started showing up around the first of June and 15 days later I have already started to see some regrowth from lower shoots. Some of the more severely damaged areas may require 3 or 4 weeks of good growing conditions to fully recover. More information about Ascochyta Leaf Blight can be found from these links to theColorado State University and University of Missouri fact sheets. Here are some answers to the questions you have been asking about this turf problem.

What caused the problem?

A fungus called Ascochyta leaf blight cause the rapid straw discoloration of turf leaves and it was instigated by dry hot and dry conditions.

Why did the problem seem to stop right on the property line and why is my lawn having the problem?

The problem started with the hot and windy conditions in the last week of May that caused heat and moisture stress on many lawns. Since lawns with less nitrogen and no previous irrigation are more tolerant of sudden drought and heat, these more hardy lawns (usually the lighter green and less attractive lawns) were less affected by Ascochyta leaf blight.

Should I change my lawn management practices or lawn care company?

It is unsettling that the best looking lawns suddenly become the worst looking lawns, but I wouldn’t pin the blame necessarily on yourself or your lawn care company. We see Ascochyta leaf blight every year on a very small scale and it is normally an insignificant disease that simply recovers and goes away on its own. If you are fertilizing with 2 to 4 lbs N/1000 sq.ft. per year then you are not using excessive nitrogen. If you feel your lawn is receiving too much nitrogen then apply 0.5 to 1.0 lbs N/1000 sq.ft. less in a year to determine if you are content with the appearance at a lower level of nitrogen. A more important factor is how you water the lawn.

It appeared to me that many lawns with automatic watering systems were damaged. Your goal should be to water about once a week to supply approximately one inch of water. Watering more often produces shallow rooting, lush plants, more disease spores, and an overall less drought tolerant plant. The problem is not having an automatic irrigation system; instead it is how you use it. Automatic systems are an efficient and simple way to water the lawn. It doesn’t mean that just because you invested in one that you need to run it often. Instead your goal should be to operate the system as infrequently as possible. Allow the lawn to dry between irrigations and show slight wilting in just a few spots before you initiate an irrigation cycle. This insures air in the rootzone and promotes deeper rooting and plant cells that are more tolerant of dry conditions and disease.

The two most damaged lawns that I visited had been frequently watering with their automatic irrigation system and then suddenly stop using it for repairs when the hot and dry conditions hit in late May. The frequent watering may have produced excessive Ascochyta inoculum that only caused infection with the onset of heat and drought stress.

Should I use a fungicide?

No, fungicides are not recommended. First it is impossible to predict when Ascochyta will damage turf. Ascochyta is almost always associated with heat or drought stress, but turf often recovers from both of these stresses when Ascochyta is not present. It would not be practical to treat preventatively for Ascochyta every time we have heat and drought stress. Applications of fungicide on lawns already damaged by Ascochyta are also not recommended because leaves already damaged by this foliar disease cannot be helped and the recovering green leaves are not infected.

Really, you should do nothing drastic to the lawn. In most cases the lawn will recover in 3 to 4 weeks. Once the brown tips of the leaves have been pushed up and mowed off the new green leaves will make the lawn look more normal. The straw turf along with the thatch in some lawns created dead looking debris on the surface and many of you have asked about power raking, dethatching , and reseeding to remove the brown grass. It is a judgment call that you and your lawn care company can make based on the amount of actual damage in the lawn.

Most of the lawns I am seeing will recover with at least 80% green turf and for that reason I would do nothing except irrigate only enough to avoid severe wilting. Since we are heading into the hottest and most stressful part of the summer I would not add more stress to the lawn by dethatching during the summer; save your coring and dethatching operation for the fall.

Here are a few pictures from the 20 lawns I visited in Des Moines, Ankeny, and Ames.​ 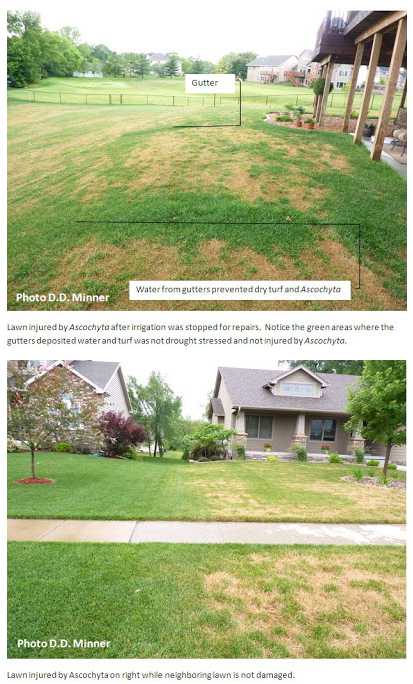 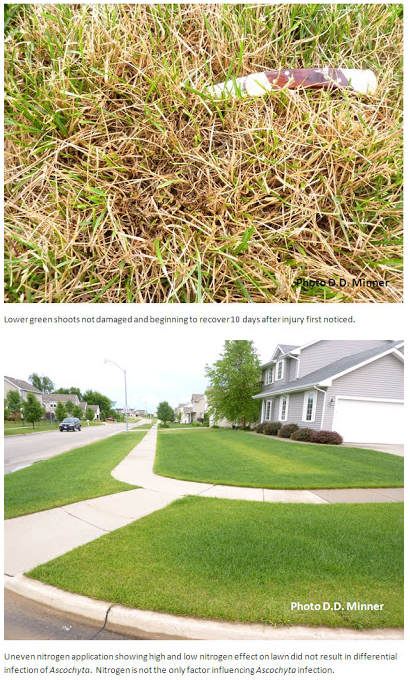 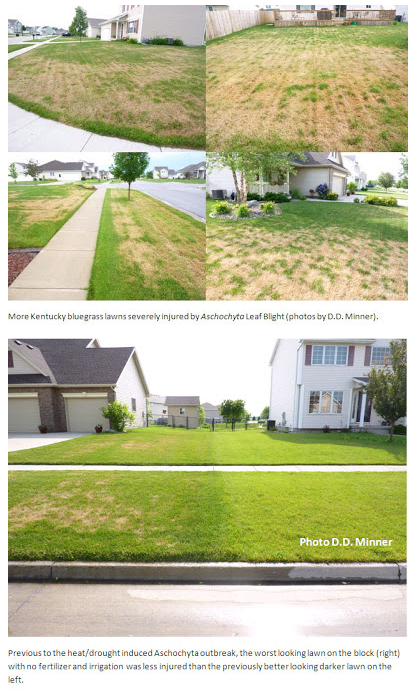 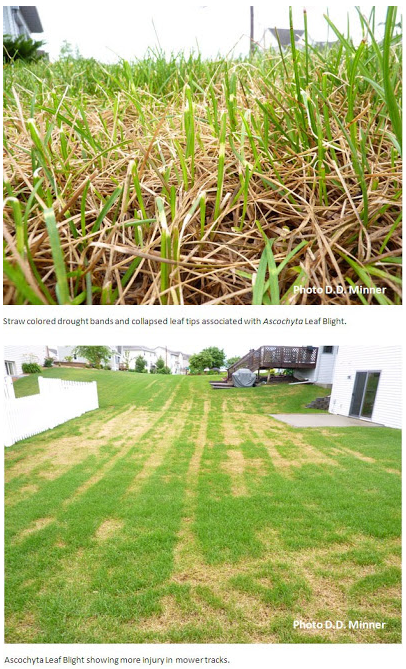 For the second year in a row Ascochyta has hit lawns, athletic fields, and golf course turf. Ascochyta leaf blight is a grass fungus that causes a rapid straw to bleached appearance of the leaves primarily on Kentucky bluegrass and to a lesser extent on perennial ryegrass and tall fescue. The damaged lawns started showing up around the first of June and out breaks have been occurring all summer long. Some of the more severely damaged areas may require 3 or 4 weeks of good growing conditions to fully recover.

The damaged areas seem to occur very quickly; one day the grass appears fine and the next there is bleached tan grass everywhere and most noticeably where the mower tires track. In fact, to those unfamiliar with this problem they think that someone has damaged the lawn with a pesticide or fertilizer application. The Ascochyta related problems I am seeing have nothing to do with product applications. The fungus likes to grow during wet conditions favored by lots of rain or over irrigation. Infectious spores are everywhere throughout the lawn and with a sudden increase in hot temperatures they rapidly infect the stressed grass.

Tire tracks show up because the tires spread the spores and also cause just enough abrasion stress for the fungus to enter the plan tissue. Look for bleached leaf tips that are collapsed. It looks devastating because the top part of the plant is severely damaged but the crowns and lower stems are seldom killed. The attacks are so haphazard that it is impossible to give a good recommendation as to when to avoid mowing but in general raising the mowing height and mowing less frequently will reduce your chance of experiencing a mowing track incidence. It is interesting to note that Ascochyta blight in home lawns only occurs in full sun areas and it stops where the shaded lawn has less heat stress.

The damage at first appears very dramatic but the good news is to simply be patient because most of the damage is on the leaves while the crowns and roots of the plant are not damaged. As the plants continue to grow and after about a month of normal mowing the damaged leaf tips will be removed and the lawn will return to normal.
Normally we don’t recommend a preventative fungicide because it occurs too haphazardly and a curative fungicide doesn’t help after the leaf tissue is blighted. However, if you have experienced this in the same lawns and athletic fields for two years in a row you may want to consider a single preventative application of a fungicide next year from mid May to mid June.

Much of the turf I have sampled this summer has been confirmed to be Ascochyta by laboratory identification of spores. Like most of you old timers over the years I have observed tire tracking that we have assumed to be related to hot or dry conditions. Laboratory identification of the pathogen is the best way to determine if it was related to Ascochyta. Next year we will be conducting research with fungicides, moisture conditions, and wheel pressure to determine what is causing the tire tracking; is it Ascochyta or is it simply high temperature or low moisture stress. I think most of the blighting and wheel tracking we observed in June and July were associated with Ascochyta. To a lesser degree we may have also observed some wheel tracking from high temperature/drought stress.

Areas that have been severely injured can be recovered by dethatching, hollow tine aerification, and reseeding in September.

Here are some of the Ascochyta injured lawns that we have observed in Iowa during the summer of 2011.