Last week, Spencer Nelson, one of our undergraduates, brought a picture to me of a disease on creeping bentgrass seedlings from the new Iowa State University Golf Performance Center south of Ames, IA.  The bent had been seeded approximately a month before the picture was taken.  The disease looked like Yellow Patch, a cool temperature disease caused by Rhizoctonia cerealis.   He took a sample to the Iowa State Plant Disease Clinic and had pathologist Erica Saalau-Rojas grow it out on agar plates.

I was in Chicago this week for a golf course superintendent's meeting at Medinah Country Club.  One of the subjects that came up at the meeting was that they are also seeing Yellow Patch on seedling bentgrass in the Chicago area.

Here is some information from Spencer on what he saw and what was applied to control the disease.

A patch disease has developed on seedling creeping bentgrass at the new Iowa State Golf Performance Center just south of Ames. The patches are showing up in bentgrass seedlings of four different cultivars in both USGA greens and native soil fairways. The 4 bentgrass cultivars are V-8, L-93, 007, and an Alpha/T-1 blend.  The patches are between six and twelve inches in diameter with a yellow border. The foliage inside the ring is mostly purple.

Initially the patches were small and yellow with little to no purple and were believed to be a fertility problem. As the patches grew a fungal problem became a more evident diagnosis. The second assumption was Yellow Patch, Rhizoctonia cerealis. Samples were taken to the ISU Pathology lab for identification. Before the results were back from the lab, the area was treated with Instrata(chlorothalonil, fludioxonil, and propiconazole). The pathology lab confirmed the diagnosis of Rhizoctonia spp.

Figure 1.  Is the Yellow Patch symptoms as they appeared on November 7, 2012. 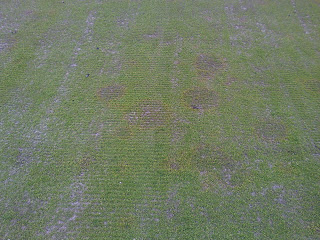 Figures 2 and 3 are microscopic pictures of the organism that was grown on agar media at the ISU Plant Disease Clinic.  The hyphae show the septa and the classic right angle branching with the pinched appearance at the right angle of a Rhizoctonia. 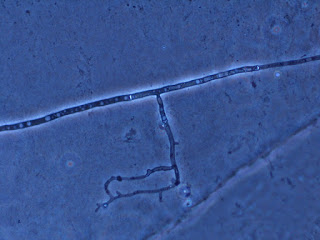 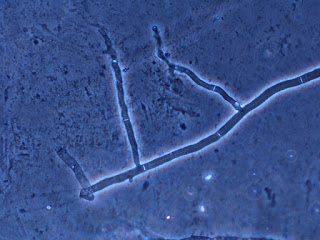