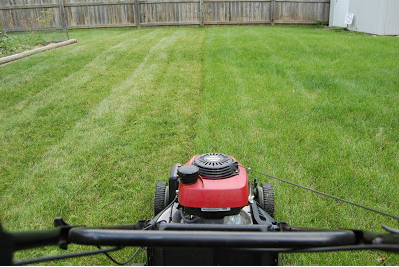 Recently, I was skimming through a textbook about maintenance reduction practices for turfgrass settings and I stumbled upon a section that discussed the one-third rule of mowing. I’m sure most everyone has heard about this recommendation as it appears in almost every textbook and extension publication. This common rule states that no more than one-third of the plant should ever be removed in a single mowing. However, this rule is commonly ignored. You probably remember many other “rules” from your introductory turfgrass classes that are also commonly violated: irrigate deeply and infrequently, never mow when the grass is wet, avoid fertilization during the summer months, etc… So are there any absolute truths when it comes to turfgrass management practices? The truth of the matter is that turfgrass management often deals in shades of gray. There seems to be exceptions to almost every rule.

Most recommendations stem from research, which is usually a good thing. But sometimes the inference space of the research is extended beyond the original scope of the project. For instance, a study investigating the growth of bentgrass cultivars will only provide information about the growth of bentgrass cultivars. The results of the study should not be applied to other species of turfgrass such as bluegrasses or ryegrasses. The recommendation of the one-third rule is a classic example of a research project being extended beyond its inference space.

The 1/3 Rule is Born
The one-third rule originated from a greenhouse study done by U.S. Department of Agriculture scientists about 60 years ago on forage type Kentucky bluegrass. The goal of the study was to investigate the effect of cattle defoliation on the growth of the roots. Results of the study showed the grass (or roots) didn’t die when more than one-third was removed. The growth of the roots simply paused for a short time before resuming normal growth. The findings from this study were eventually morphed into the creation of the one-third rule.

More Recent Research
A similar defoliation study was recreated in 1986 by a group of turfgrass scientists at North Carolina State University (Shepard et al, 1989). This study was conducted in the field with a “high” and “low” maintenance tall fescue maintained at 3 and 6 inches, respectively. Each grass was allowed to grow 30, 50, 100 and 300% taller than the maintained height before being mowed. The 50% defoliation treatment signified the maximum guideline of the one-third rule – 30% was within the recommended guideline, and the 100 and 300% treatments violated the one-third rule. The researchers found that the tall fescue could grow to double the original height before being defoliated without negative consequences (tall fescue maintained at 3 inches could grow to 6 inches before being cut without serious consequences). The 300% treatment resulted in senescence to a portion of the tall fescue stand. The results of the NC State study indicated that the one-third rule has little merit, yet the recommendation lives on. One reason could be the detrimental effect of excess grass clippings that shade the turf underneath. Either way, the one-third rule is by far an unconditional truth.

So what is the moral of this story? Recommendations should not always be taken at face value. Ask questions and spend some time investigating how they came about before taking action. You may just be surprised when you learn the rest of the story.

Keep the winter jacket handy at least for a little while longer. After experiencing summer-like weather conditions during the month of March, most of the state is under a freeze watch for Monday and Tuesday night. These more “normal” temperatures will feel anything but considering the very abnormal spring temperatures to date.

Temperatures in central Iowa averaged 55.7 F during March which is 16.4 degrees above normal. Overall, there were 12 days during March when the daytime temperature was in the 70’s or 80’s. The warmest day of the month occurred on the 16th with a high of 84 F. Now, we must prepare for frost. Historical weather records show that the average last date for frost occurs sometime between mid-April to the first week of May depending on your location in the state.

So what exactly is frost? Frost is the formation of white ice crystals on an exposed outside surface such as leaf blades. Annual plants are often more sensitive to frost and will need to be brought in or covered to be protected from the freezing temperatures. Luckily, our perennial turfgrasses are more tolerant and frost in and of itself will not cause damage to plant tissue. However, damage from frost can occur if there is traffic on the turf while frost is present.

Cart or even foot traffic is enough to cause damage. Because the cells within the plant are primarily water when the temperatures gets below freezing this water can also freeze. Traffic on frozen turf causes the ice crystals to puncture cell walls within the plan. Even though the turf will appear alright the damage has occurred internally. Frost damage symptoms include white to light tan leaves where traffic has passed. In time, the turf will acquire a brown to blackened color. Damage is usually limited to leaf tissue and will remain until new growth replaces the damaged turf. Mowing will help remove some of the damaged tissue and improve the overall appearance of the turf. In severe cases, damage can affect the crown of plant.

It’s difficult to prevent frost from occurring and perhaps the best strategy is communicating with the golf course staff. Have them to pay special attention to low-lying areas and shady areas. Cold air tends to settle into these areas and will likely be the last place frost melts. Just because there isn’t frost on the putting green which is exposed to full sun in the morning doesn’t mean the entire facility is clear.

Irrigation can be used to help speed up the melting process through the release of latent heat. When water changes from a liquid to a solid by freezing it gives up heat. In actual practice, surface temperatures will be held around freezing as long as liquid water is available. A light syringing of the turf can aid in this process.

Covers can also be used to protect turf from freezing temperatures although placing and removing covers is a labor intensive process. Newly seeded turf or renovated areas where recovery needs to occur will benefit from the heat trapped under the cover.

Until you reach your frost free date, keeping people off the course when frost is present is the best way to prevent damage. 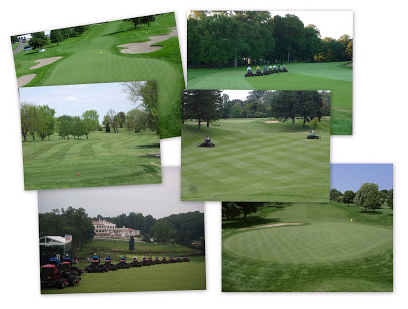 There have been a couple of recently published articles concerning mowing procedures for golf courses. A USGA Green Section Record article highlighted the costs associated with mowing patterns and there was a nice article in the January issue of Golf Course Industry Magazine about alternative mowing patterns.

The true function of mowing is to prepare the golf course for play although mowing patterns are often used to highlight the different features of a golf course. The mowing pattern can have a big impact on the appearance of the golf course and the health of the turf while affecting your labor and fuel consumption line items. The most common fairway mowing methods are striping, contour mowing, the classic cut, and pushing and pulling. 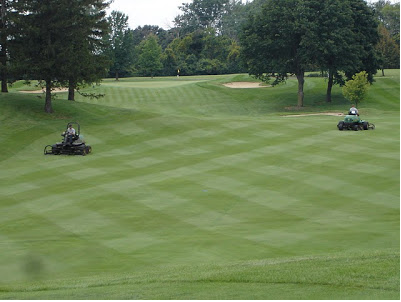 Striping – This is the method practiced by most golf courses. Stripes are often mowed in at least two directions to create a checkerboard pattern. This method creates a striking aesthetic appearance. However, the frequent turning of the mower in the intermediate and primary rough can lead to excessive wear on the turf. 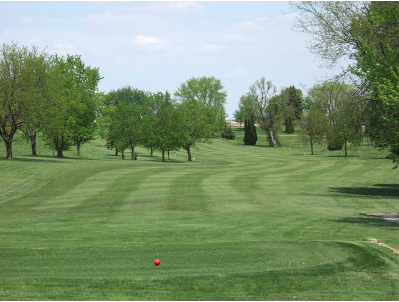 Contour mowing – This method also creates stripes but differs slightly from contemporary striping. Rather than creating a checkerboard, contour mowing creates curved stripes that follow the contour of the fairway. 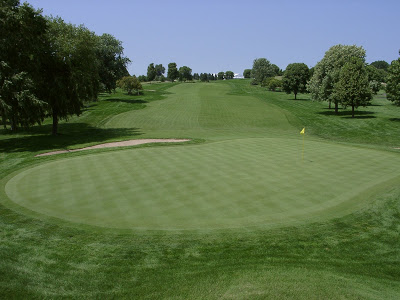 Classic cut – This style was very prevalent before lightweight fairway mowers. Larger gang-unit fairway mowers of the past which were harder to maneuver mowed in the circular pattern creating light and dark halves of the fairway. The classic cut reduces mower traffic in the rough and often takes less time compared to striping helping to reduce labor and fuel costs. 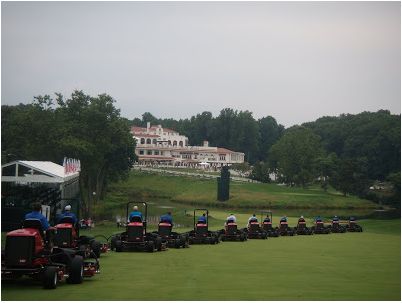 Pushing and Pulling – This method creates a fairway that is void of stripes. Pushing the fairway is when the turf is mowed from tee to green and pulling is mowing the turf from green to tee. A large number of mowers are necessary in order for this method to be efficient. Fairways are often mowed this way for championship events.

The most appropriate method for your course will depend on the desired appearance, your turf species and budget and labor considerations. If you prefer striping your fairways and have the resources to do so, by all means continue. However, some golf courses are using the classic cut because it is more efficient and a better use of their fuel and labor resources. Also, the overall health of the intermediate and primary rough will benefit from the reduced mower traffic. Courses with the slow growing Kentucky bluegrass planted in their intermediates might especially benefit from the classic cut and the reduced wear.

If you have experimented with any of the alternative mowing styles let us know how they are working and what you think of them. Until next time, Happy Mowing! 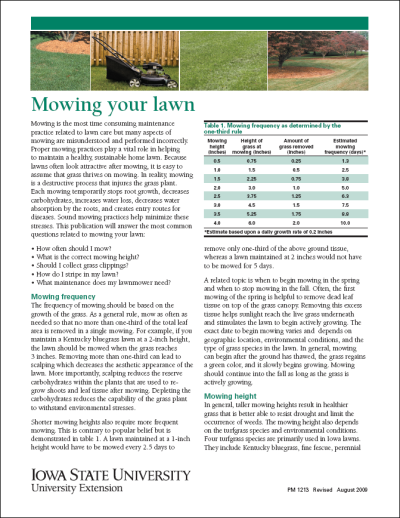 Here is a good post from Rod St.John who graduated with his Ph.D. from Iowa State a few years ago.  He is presently working in extension with Kansas State in Kansas City.
http://www.ksuturf.org/blog/2012/05/how-to-mow-your-yard-rebuttal-of-a-consumer-reports-article/