On July 6, 2015, I posted a blog about summer patch, caused by (Magnaporthe poae), on the turfgrass research area.  It was a major outbreak of this disease.  In late May, a few days ago, I was looking at the area.  The disease is not active now, but the interesting thing about the area is how dandelion seed landed in the dead part of the rings and germinated in the fall and spring.

The first two pictures are from the post on July 6 of last year when the summer patch was active.  The last 4 are from May 20, 2016 showing the dandelions.  The dandelions had been treated with a broadleaf herbicide a week earlier. 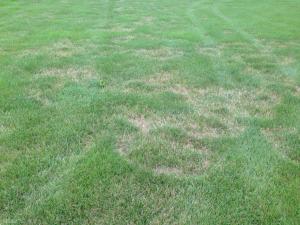 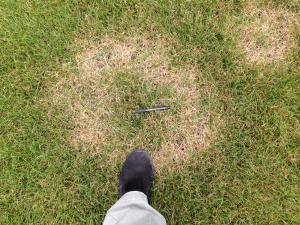 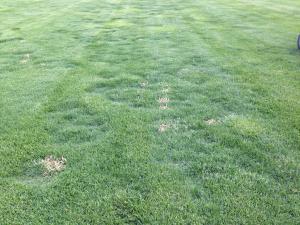 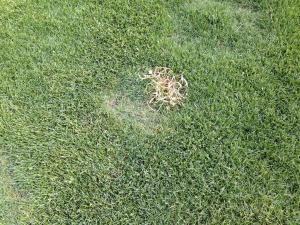 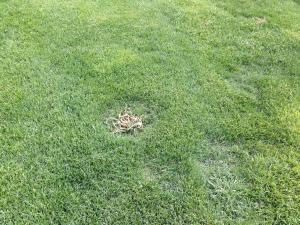 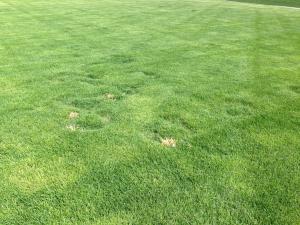 Here are a couple of great pictures from Nicholas May of True Green lawn care in Des Moines.  These pictures were taken south of Des Moines this week.  The disease is summer patch, caused by (Magnaporthe poae).

For more information on this disease, search "summer patch" in older editions of this blog. 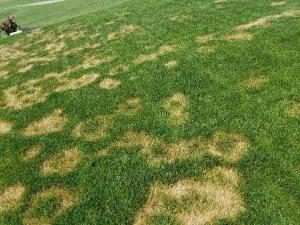 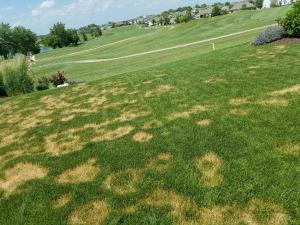 This has been one of the worst years for Brown Patch caused by the fungi Rhizoctonia soloni that I can remember.  This organism attacks several grass species.  We saw a lot of it in Tall Fescue this year, I also saw it in Kentucky bluegrass, and of course, it usually hits creeping bentgrass every year.  This morning at the research station, we had one of the worst outbreaks I have ever seen on creeping bentgrass green.  The attached video shows the extent of the damage.

Brown patch usually goes away with a weather change and the damage recovers quickly.  You can also treat it with fungicides.  We decided not to treat the green with fungicides at this time because our NTEP bentgrass trial is on this site.  Hopefully I can get some data on differential damage to the various experimental cultivars.  If that happens, I will do another blog on the damage.

Here is the video.  Notice the classic "halo" around the outside to the blighted area.

The symptoms went away after 3 days.  We will let you know if they return.

Gray Snow Mold is a common winter disease that affects a number of cool-season grass species in the northern region.  It is caused by the fungi Typhula incarnata (and a few other species) It occurs during the winter, usually under snow cover.  We generally see circular patches of cottony mycelia six to eight inches in diameter as the snow melts in the spring.

This year was particularly bad for Gray Snow Mold because of the heavy snow and extended snow cover of turf areas.  There is also a Pink Snow Mold that attacks turf in the winter.  It is caused by fungi in the Microdochium genera.  One of the main, visible differences between the two is that Gray has sclerotia.  These are large, leathery fruiting bodies that appear on the tissue (see below).  Pink does not have sclerotia.

I have had a lot of calls this spring on the snow mold, both from golf course superintendents and lawn care specialist.  On golf greens and fairways, it can cause damage that will be present until as late as June.  For that reason, we generally treat these areas with fungicide in the fall to prevent it.   On golf course roughs and lawns, the damage can be very apparent in the spring as the snow melts, but it usually goes away quickly as the areas come out of dormancy.  Fungicides are very expensive and we generally do not treat lawns and golf course roughs.  In the rough, spring fertilizer and mowing will help to clear these areas.  Once you see the symptoms in the spring, it is too late to apply a fungicide.  This needs to be done in the fall.

If you are in lawn care, explain to your customer that the damage will recover quickly with a little fertilizer, mowing, and warm-weather.  Raking some of the debris away may improve the appearance of the areas, but it is not necessary. 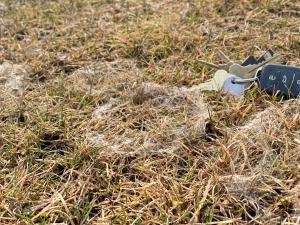 Figure 2.  Close up of mycelia.  Picture by Timothy Christians. 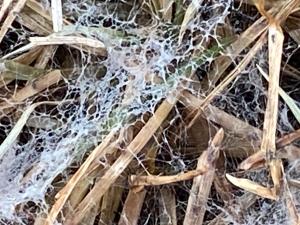 Figure 3.  Picture of snow mold on Kentucky bluegrass lawn in Des Moines.  Picture by Nicolas May of Trugreen Lawn Care. 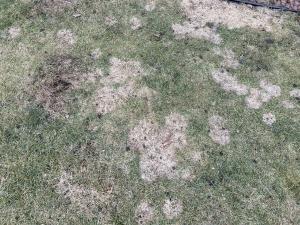 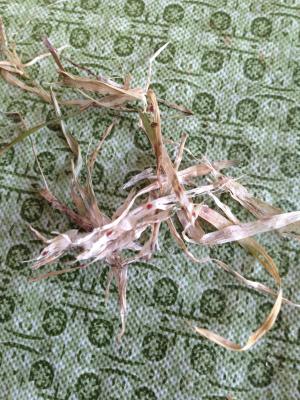 Figure 5.  Close up of sclerotia.  Picture by Nick Christians.