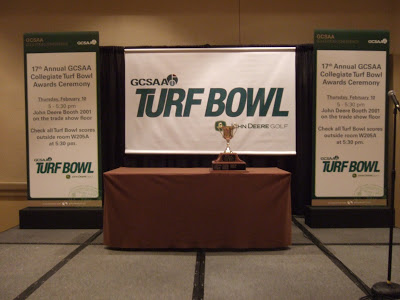 The 2011 Golf Industry Show is in the books. That’s also been the focus for a group of Iowa State University undergraduate students for the past 3 months who had been preparing for another run at the Collegiate Turf Bowl Competition.

John Deere sponsors the competition and awards a traveling trophy to the winning team along with cash prizes to teams who placed in the top 10. The winning team included Nick Dunlap, Quincy Law, Zach Simons, and Jason Van Engen, all seniors in Horticulture at Iowa State. The team received a $4,000 cash award which goes to the Turf Club. Three other teams from ISU competed and finished 17th, 47th, and 48th. The teams must complete a three and a half hour test on soils, turfgrass species, weeds, diseases, insects, mathematics, plant physiology, human resources, and financial management along with a case study question. 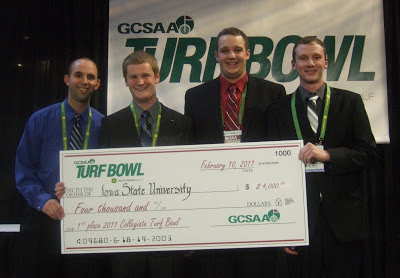 The Turf Bowl is a highly competitive event with this year’s competition consisting of 87 teams from 32 colleges and universities. This year’s victory marks the 9th time in 10 years that a team from Iowa State has won the competition.

I have been fortunate to be involved in the contest for a number of years, first as a participant and then as a coach to our undergraduate teams. I want to thank all my “students” over the years that I’ve had the opportunity to work with. Thanks for an amazing experience!

There were many other activities at the GIS including educational seminars and the trade show. I attended seminars on irrigation water quality and electrical troubleshooting of irrigation systems. Managing turf that receives Irrigation from poor quality water will be an important skill moving forward as water demand and awareness of water usage increases. We discussed the various components of water quality such as salt content, sodium hazard, residual sodium carbonate, pH and ions present is toxic concentrations and how to interpret and adjust management practices to deal with water quality issues.

The electrical troubleshooting seminar was hosted by the Irrigation Association. This seminar covered basic troubleshooting skills such as how to properly use a volt-ohm meter along with many other gadgets in order to diagnose field wiring problems. 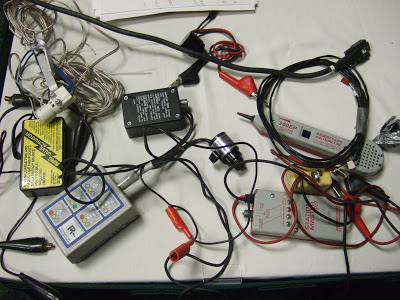 Enjoy the "warm" weather headed our way. Maybe that groundhog knows what he's doing after all.

I will be presenting a new seminar at the Golf Industry Show in Orlando this year. It is called Plant-Soil Interactions. It will be presented on February 8 from 8 to 12 noon. The primary focus of the seminar is soil test interpretations and how they can be used on the golf course.

Mike Agnew and I will also be presenting the "Calculations and Practical Mathematics for Use in Golf Course Management" seminar from 8 to 5 on Monday Feb. 7.

If you are interested in either of these, register through GCSAA.