It’s the time of year we all dreaded as kids. The days have become shorter, the temperatures cooler, and school is back in session. However, for many golf courses this time of year brings with it the opportunity for major renovations. Soil fumigants, such as methyl bromide, can play a pivotal role in the renovation process. The United States Golf Association (USGA) recommends soil sterilization during the renovation and building process in order to reduce competition from weed seed, soil borne insects, nematodes, as well as soil borne diseases. For decades turf managers have relied on the fumigant methyl bromide as an affordable and effective soil sterilant.

There are three main factors that influence the efficacy of methyl bromide; soil moisture, soil temperature, and soil tilth.

· Soil Moisture: Soils with too much, or too little moisture can reduce the efficacy of methyl bromide fumigation. When soils are too wet, the fumigant can become diluted, reducing its sterilizing potential. However, soils that are too dry also pose a problem. Soils that don’t have enough moisture tend to allow the methyl bromide to move through the soil profile too quickly. The soil should be kept wet for at least one week prior to the fumigation to allow for the germination of weed seeds. Just before the fumigation is to take place, the soil should be dried to the equivalent of slight dampness.
· Soil Temperature: The higher the soil temperature, the easier it is for methyl bromide to vaporize. At soil temperatures above 40°F, methyl bromide will readily vaporize and diffuse through the air and soil.
· Soil Tilth: Methyl bromide works the best when applied to loose, tilled soils that are free of weeds and other organic debris. Soils should also be cultivated prior to fumigation. The depth at which the soil is cultivated will be approximately equivalent to the depth at which the methyl bromide penetrates. For the best results, a penetration depth of 8 to 10 inches is recommended. Areas that are under vegetation should be scalped and aerified before the fumigation process. 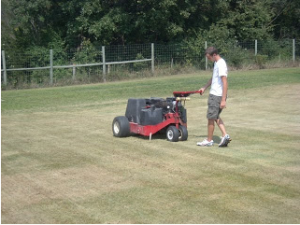 There are two methods for methyl bromide application; the hot gas method and the tractor applied method. Both methods require a certified applicator and commonly consist of application rates from 100 to 400 lbs of active ingredient per acre. The plastic coverings can be removed from the treated areas in as fast as 3 hours per fairway or 5 hours for 18 greens. The hot gas method was recently used at the ISU Horticulture Research Station to fumigate an area that had previously been established to roundup ready bentgrass.

· Hot Gas Method: The hot gas method is used whenever the mechanical application method is not an option due to space, access, terrene or no till application. Usually treats 120,000 ft² per day.

Step 1: T-tape drip tubing is placed at 6 ft. intervals assuring even distribution of the gas over the entire area to be treated. 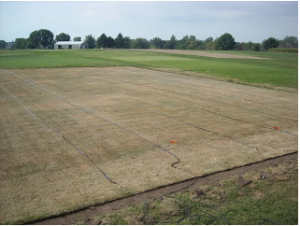 Step 2: Hand lay polyethylene tarps over the treated area securing seems with quick dry fumigant adhesive and covering the edges with dirt or a layer of pre-cut sod. 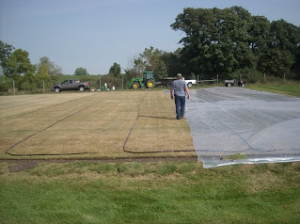 Step 3: Methyl bromide is forced through a heat exchanger and into the drip tubing. Scales are used to determine the precise amount of fumigant used. 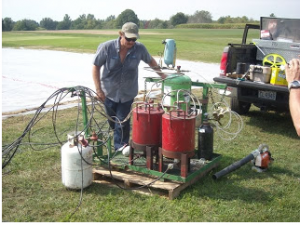 Step 4: Polyethylene tarps can be removed after 48 hrs. or when the methyl bromide concentrations are below 5ppm.

· Tractor Applied Method: The tractor applied method is used any time the undulation and area allow for its implication. Each machine is capable of treating approximately 1 large par 5, 2 par 3’s, 250,000 ft² of sports field, or 20 acres of sod farm per day. Each machine injects methyl bromide 8 to 10 inches deep through solid knives. Once the methyl bromide is injected, the machine covers the soil with high barrier polyethylene tarps.

Methyl bromide has been a very effective chemical for sterilizing soil systems. However, methyl bromide is currently being phased out due to its potential harm to the ozone layer and human health. Soil sterilization, never the less, will remain a common practice as it promises to prolong the development of problematic weeds, soil borne diseases, nematodes, and soil borne insect problems in newly established turf. For more information on mehtyl bromide fumigation visit http://www.hendrixanddail.com/index.asp

The following is a post from Zach Simons. Zach is working on a masters degree through the master of Ag. program with a specialization in turfgrass science. He is working this summer with Dr. Van Cline at Toro in Minneapolis on a very interesting project that involves the mapping of soil conditions in turfgrass areas using remote sensing and GPS (global positioning system) technology. This is part of his creative component for his MS degree.

If you get Golf Course Management, you will find an article on this technology by Dr. Cline and Dr. Carrow of the University of Georgia in the August issue.

From Zach:
The increased emphasis on reducing water usage in the turf industry has increased the need for site-specific management. Toro has been developing a product called the Precision Sense 6000 (PS 6000) that can give site-specific soil information in turfgrass. The PS 6000 is a mobile sensing machine that measures soil moisture, soil salinity, soil compaction, and turf vigor. It is designed to be used on golf course fairways and athletic fields. A sensor that measures soil moisture, soil salinity, and soil hardness is attached to a rotating arm on the machine. A spectrometer measures the turf vigor by measuring reflected energy from the turf canopy at a wavelength in the red area in the visible spectrum and a wavelength in the near infrared portion of the spectrum.

The PS 6000 is pulled by a heavy-duty workman set to a speed of 1.9 miles per hour (mph). The machine moves at a speed of 1.9mph so samples are taken every 8 feet with a spacing of 8 to 12 feet between adjacent passes. Data on an average par 4 fairway can be collected in 45 minutes and it takes a day and a half to 2 days to collect data on an entire golf course. 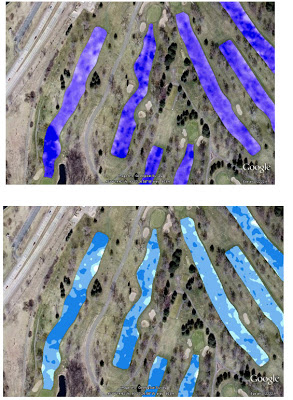 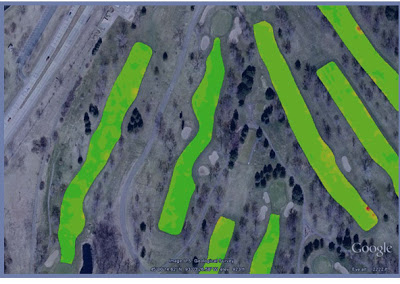