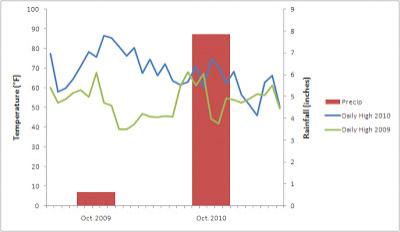 Last week the state received some much needed precipitation. Rainfall in October was well below normal. A period of dry weather began on September 26 for many parts of the state and continued through October 22. During this time period the average statewide precipitation was 0.04 inches compared to a normal for the period of 2.24 inches. Ames received a measly 0.62 inches of rain during October which ended up ranking as the 15th driest among 138 years of records. This is in stark contrast to October 2009 when Ames received 7.86 inches of rainfall.

October 2010 temperatures were above normal and overall much greater than temperatures during this time from one year ago. The warmest day was the 8th of October when we hit a whopping 86 degrees.  The extended fall weather provided an opportunity for turf to recover from the summer stresses. Hopefully, the majority of the readership also experienced good growing conditions. The temperatures have cooled significantly in November and some parts of the state have already received their first snow cover.

Everywhere you look outside there is more and more evidence that the season will soon be over. I have been enjoying the beautiful fall colors the last couple of weeks. For a turf guy, the fall colors I’m referring to are the reddish-browns, blues, and purples found on established creeping bentgrass putting greens. This phenomenon is evident during cool/frosty temperatures in the spring and fall. These colors tend to appear in patches and are a response to physiological changes occurring in the plant. So why does the bentgrass change color? 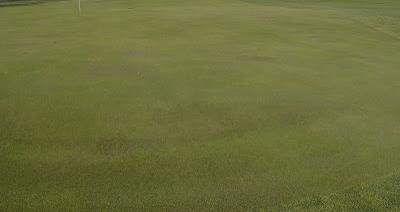 Often during the spring and fall the daytime temperatures are relatively warm while nighttime lows can dip below freezing. During the warm, sunny days the plant leaves and stems are able to manufacture large amounts of sugar through photosynthesis. These sugars are normally translocated to the crown of the plant during the night for storage and for use in other plant processes. But, when nighttime temperatures get too cold for the sugars to be properly translocated they end up getting “stuck” in the leaves and stems. This accumulation of sugars appears as shades of red, purple, and blue colors.

I’ll leave you with a couple late fall pictures. 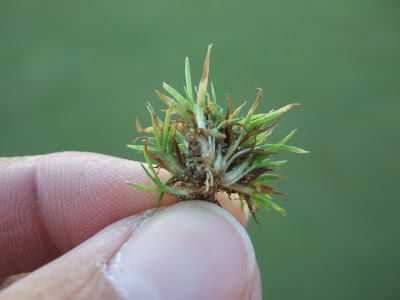 With the cool temperatures and lack of rainfall, the only disease I have spotted the last couple of weeks has been yellow tuft. 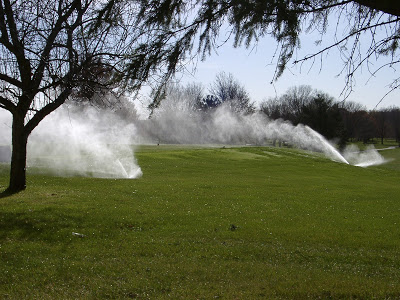 A common sight at many golf courses as they prepare for freezing temperatures. 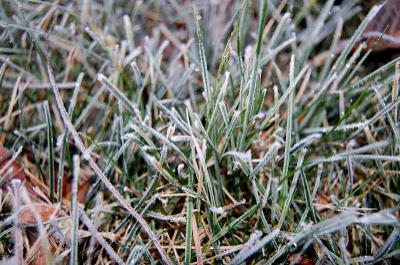 Turf covered in frost greets us most mornings now. Soon the turf will be covered in snow.