Right on schedule, the billbugs are back again this year. It is late July and early August each year that I get calls to come and look at lawns that look like they are "sick". The lawn below is in Gilbert, IA. While there is some leaf spot on this site, much of the damage was caused by billbugs. 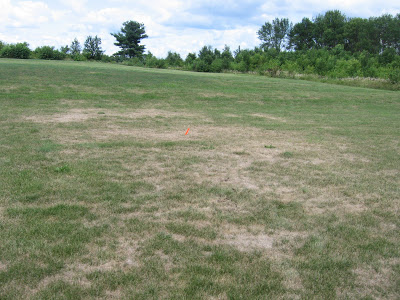 The billbugs overwinter as adults. The adult female uses its bill (feeding mouth part) to burrow into the sheath just above the crown of the grass. She then deposits an egg in the sheath where it is is safe from most insecticides. This usually takes place in late April or early May. The egg hatches in July and the larvae proceeds to eat through the crown and to emerge into the soil. (The two pictures below are commercial slides from the American Society of America slide set on turfgrass insects) 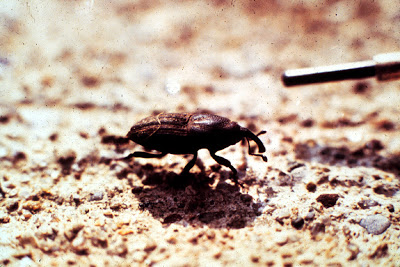 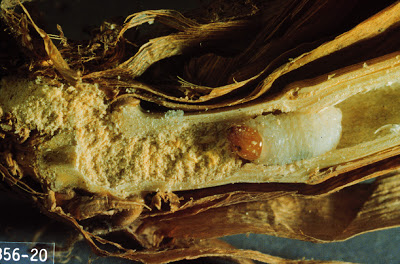 To diagnose the problem, reach down and pull up some of the dead grass. If it is bill bugs, the grass will break away at the crown. The remaining tissue will be hollowed-out at the base. 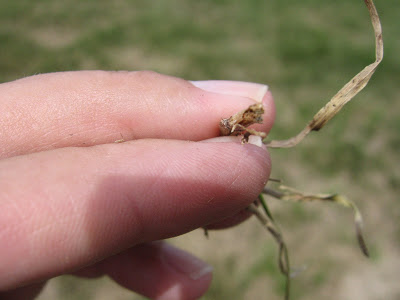 Dig down into the soil and there will be many hollowed-out stems and a saw-dust like material left behind by the feeding larvae. 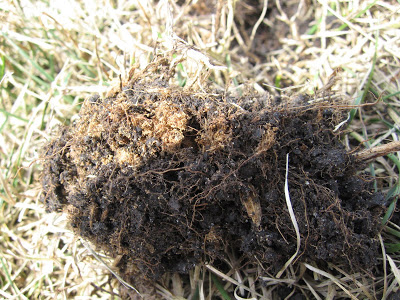 In early August, there will likely be larvae present in the soil 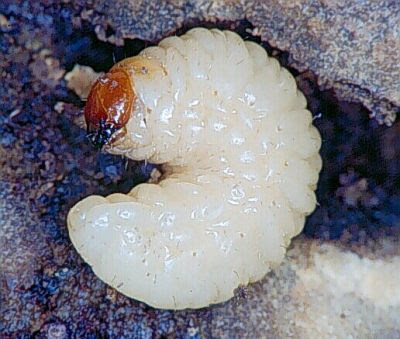 The larvae not very big. The picture below shows one on the tip of my pocket knife. 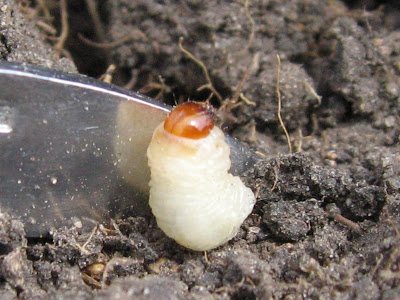 The larvae will soon turn into pupa and then into adults. This picture from the research station shows a larvae and an immature adult together in the same location. 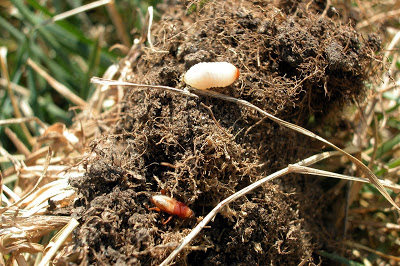 The first question that I usually get from the home-owner is, "should I spray in insecticide now (in August)". The answer is no. The damage is already done and the application of an insecticide after the damage has occurred is not going to help. You have to treat the adult females in the spring before they lay their eggs. Late April is the best time to treat, however, that is difficult because they is no apparent damage at that time of year. You are also unlikely to see many adults at the that time of year.

There are systemic insecticides that could potentially be used when the larvae are in the sheath. The problem with that is that you do not see the damage before it is too late to treat.

This is a difficult pest to deal with because of these complex timing issues. If you have had a bad outbreak this year, it would be wise to invest in an insecticide application in the spring. Lawn care companies can do this, or the home-owner can do it themselves. Look for a insecticide that lists billbugs on the label. The critical thing is timing. If you apply after the eggs have been laid, you are wasting your time and money.