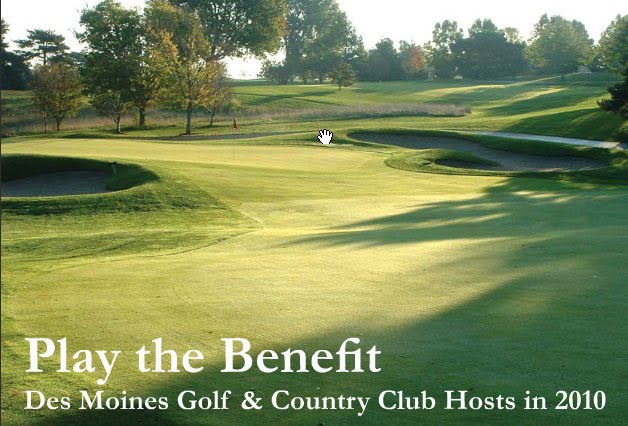 The ITI, in concert with the Iowa Golf Course Superintendent Association, holds the annual ITI/Iowa GCSA Benefit Golf tournament to secure funding for Research and Scholarship.

The ITI/Iowa GCSA Benefit has a long tradition of support from Sponsors and Players. Thanks to all who continue to contribute to making this the best of events that support Turfgrass Research & Education.

The 30th Annual Iowa Turfgrass Institute/Iowa Golf Course Superintendent's Association Benefit Golf Tournament was held October 3 at the Wakonda Club in Des Moines, Iowa.  The success of this event depends on the involvement of many individuals, vendors and allied associations.  Funds raised from the tournament support turfgrass research and scholarships.

Special thanks to golf course Superintendent John Temme and his entire staff for hosting the event and having the golf course in impeccable shape.  Everyone who participated was treated to beautiful weather and striking fall colors.  To see what the Wakonda Staff has been up to, check out their maintenance blog, Wakonda Grounds.

We were approached at the Iowa Turfgrass Institute (ITI) field day this summer by Jim Turner of Numerator Technologies of Sarasota, Fl. to perform a surfactant trial evaluating the prevention of Localized Dry Spot (LDS) on a California-style pure sand (no organic matter) T-1 creeping bentgrass putting green. What a perfect year to investigate!

The trial started on August 9, 2012, and continued through mid-October. An experimental surfactant  from Numerator Technologies called NT 6001 L was used at three different rates (6, 12, 18 oz/1000 sq. ft.) and applied every two weeks throughout the study period at a total volume of 2 gal/1000 ft. sq. The first application was allowed to dry on the turf for 24 hrs to evaluate potential phytotoxicity, of which there was none at any of the rates applied. Thereafter, treatments were watered in to facilitate movement into the soil, where the product needs to be to perform correctly.  Two weeks after the initial application on August 23, irrigation was stopped to generate LDS.  We were very effective at developing dry spots.  Once the dry spots were present, we resumed irrigation to prevent stress.

We found that the product performed well throughout the season at preventing formation of LDS, and especially shined at the end of the season after another prolonged period of drought. Plots treated at the rate of 18 oz/1000 ft. sq. had significantly less LDS in them when compared to the other rates and the control. The lesser rates of 6 and 12 oz/1000 ft. sq. also ended the season with less LDS than the control plots.

Graphical representation of LDS evolution between 9 August and 16 October 2012. Treatment 1 is control, treatment 2 is 6 oz NT 6001 L/1000 ft2 , treatment 3 is 12 oz/1000 ft2, and treatment 4 is 18 oz/1000 ft2. You can see that treatment 4 had the least amount of LDS throughout the study and had significantly less LDS than any other treatment by the end. Treatments 2 and 3 also had less LDS than the control at the end of the study. 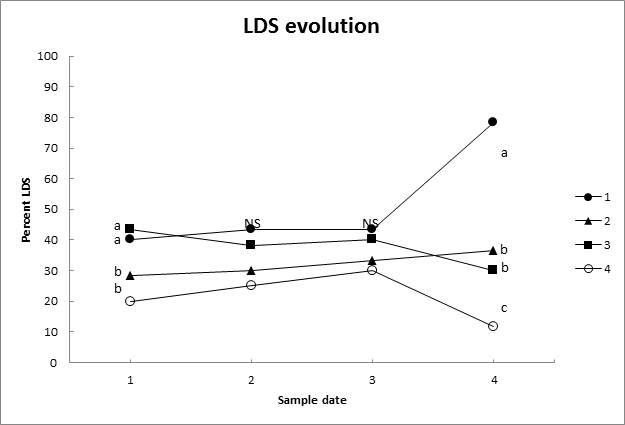 8-22-12: You can see relatively little LDS on the plots early in the trial.

8-23-12: You can easily see where surfactants have been applied. Treatment S4 (18 oz/1000 ft. sq.), nearest the bottom center of the photo, performed the best of any rate throughout the study. 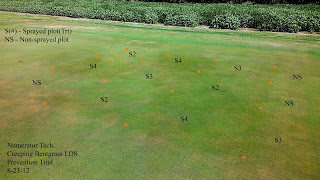 10-16-12: By the end of the study, the control plots are clearly evident. In the left column on the top and on the bottom for the middle and right columns.