Below is the second part of the 2011 Iowa Turfgrass Field Day Recap. This article highlights talks focusing on summer seeding methods, updates on moss and algae control on putting greens, apps for turf managers and GPS spraying.

If you ever need to determine how much seed you have put out, there is a simple rule you can follow. If you are sticking to normal seeding rates (1.5 lbs/1000 ft2 for KBG; 8 lbs/1000 ft2 for PR and TF), you can always pick out a 1 square inch area and could how many seeds you see. You should count somewhere around 16 seeds in a square inch for either of the seeding rates listed above.

Higher than normal seeding rates are necessary when we introduce cleated traffic to a turf stand. We don’t hesitate to recommend turf managers putting out an initial rate of at least 20 lbs/1000 ft2 when starting from bare ground to get as much wear tolerant biomass established as possible before traffic starts. This method of seeding at higher rates can also result in an essentially weed free stand of grass, especially with a quickly establishing grass like perennial ryegrass.

Moss & Algae control: Dr. Minner gave a good overview of the different types of moss and algae that can inhabit bentgrass putting greens, or anywhere conditions are right for their growth and development (wet, low mowing height, high N). He also showed preliminary results of a study that uses different methods and chemicals to control silvery thread moss on greens. Two products, MossBuster, and QuickSilver herbicide (carfentrazone), which has labeled rates and instructions for silvery thread moss control, are being evaluated both in combination with each other and on their own at different rates to determine the most effective control of silvery thread moss.

The main problem with the MossBuster product is that it can have an extremely phytotoxic effect on bentgrass, however, it is extremely effective in killing silvery thread moss. Conversely, QuickSilver is effective, but not as effective as MossBuster at finishing off moss populations. So far, a low rate of MossBuster combined with a low rate of QuickSilver, applied frequently (1 week apart), has shown the least phytotoxicity and the moss control is on par with higher rates of each product in combination or on its own. This study is still relatively new and we will continue to monitor the effects of each treatment. 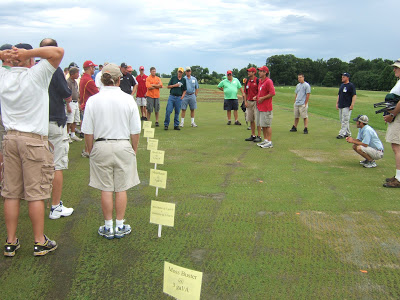 Apps for turf managers: Dr. Marcus Jones has been watching the turfgrass technology front very closely over the past few years and was able to give attendees a short discussion on a relatively new ‘App’. The iStimp is an app that claims to act as a stimp meter on golf greens and is available for Apple devices including the iPod touch, iPhone, and iPad.

Essentially, you set the ball in the small divot of the ‘home’ button on the iPhone, set it on the ground, and lift up until the ball starts to roll. Once the ball has rolled its distance, you use a built in ruler to measure the distance. The phone then calculates what the reading would be on a regular stimp meter. Dr. Jones is working on a research project that will test the effectiveness of this app when compared to the traditional stimp meter. Keep tuned to the iaTURF blog for updates on this project. 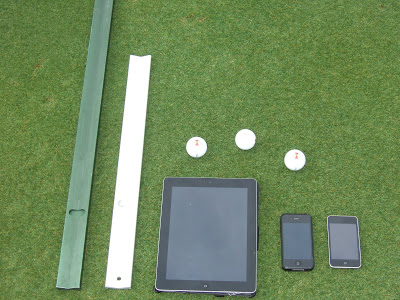 GPS spraying: GPS based technology has been around the agriculture field for a few years now and it’s slowly starting to creep its way in to the turf industry. We were fortunate to have a few of the current models on the market present at field day this year. We also saw a demonstration of how the technology works; the sprayer can minimize drift, minimize overlap, steer itself, calculate exact rates of application, and many other things. It’s truly an amazing technology and it probably won’t be long before everyone has some sort of experience with one of these machines. 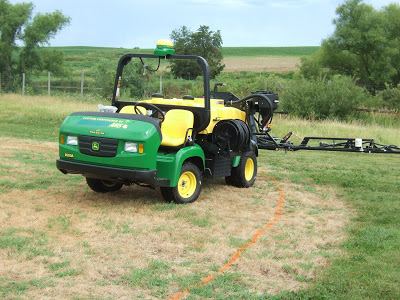 If anyone has any questions or comments about Field Day 2011, please feel free to contact me, Andrew Hoiberg (android@iastate.edu) or any of the other speakers. This truly was one of the best field days I’ve been a part of and we owe it to a great turfgrass industry in Iowa. Thanks to the vendors and attendees for a wonderful day! We’ll see you next year!