I got a call last week from the Chicago area about an accidental over application of iron (Fe) to bentgrass greens. The product was Krystal Clear chelated Fe which contains 4% Fe on a weight basis. Each gallon weighs 10.6 lbs. There are 0.424 lbs Fe/gallon. It is to be applied at 0.75 to 4 oz/1000 ft2.

The following tank mix was to be applied to the greens:

Rather than 112.5 oz of Krystal Klear going in the tank, the applicator put 1125 oz in the tank. The tank was applied to 75,000 ft2. This resulted in an application of 15 oz product per 1000 ft2, rather than the desired 1.5 oz. This is nearly 4 times the highest recommended rate of application. This was 2.16 lbs actual Fe/acre or 0.05 lb Fe/1000 ft2. Only 9 of the 18 greens were treated at this rate. The other 9 were treated at the normal rate. The greens were given 0.5 inches of irrigation the night after application.

I received the call shortly after the application and was asked to predict what would happen. While I had not had any experience with over applications of this product, I have put on rather high levels of ferrous sulfate in experimental treatments. I predicted that the greens would turn dark green to black for a few days and then recover with little damage to the bentgrass.

The pictures below were taken 48 hours after application. At the time of this posting, we are nearly a week following the application. No damage occurred to the bentgrass and the product did not turn the bentgrass black like some other Fe sources are known to do. There was a greenup of the bentgrass as would be expected, but it really wasn’t a problem and the golfers did not even notice.

The only thing that suffered from the application was some moss on one of the greens.

I was surprised by the safety margin with this chelated product. For future reference, you can go to at least 2.16 lbs Fe/acre with this product without doing significant damage to bentgrass greens in the spring. I would anticipate that there would have been a little more damage had the weather been hot.

The superintendent caught the problem after the second tank had been mixed. They sprayed that on a now mow area in the rough. They observed that it turned just the white clover black and caused no other damage.

I'll post again in a few days and let you know how things turned out. At this point, it does not look like any damage will occur. 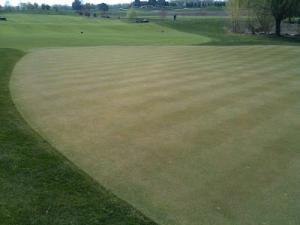 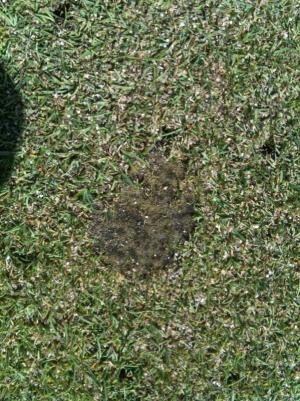 The only thing damaged was a couple of moss patches that turned black.