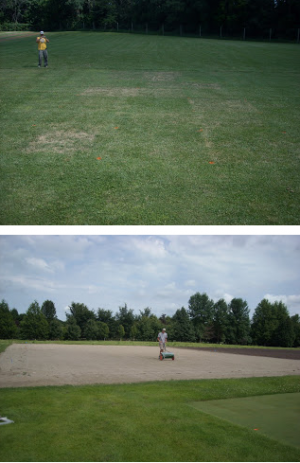 Nick, thought I would send you an update of what's been going on out at the farm in the event you wanted to post something on the blog site.We just finished seeding the new T-1 bentgrass area (July 8)(picture 2). There was approximately 8,000 square feet seeded to T-1 with the surrounding areas seeded to Front Page Kentucky bluegrass. Before the seeding was done 1lb P/1000 sq. ft. was applied using a 11-52-0 fertilizer and 0.5lb K/1000 sq. ft. was applied using potash with an analysis of 0-0-45. Feel free to swing by the research station to view the grow-in progress.

There is also a lot of brown patch present on some of our bentgrass, tall fescue, and bluegrass areas. We have also seen a remarkable amount of red thread, on both tall fescue and perennial rye, that has continued to hang on into early July. Also, last week, on July 2, the second application of herbicides was put out on the crabgrass control study.

Final data on the Tenacity (mesotrione) phytotoxicity study (picture 1) will be taken soon and the third application of fertilizer for the Micropel greens grade fertilizer study is set to go out early next week.The new bentgrass research area at the research station recently recieved its first application of fungicides (Daconil Ultrex (chlorothalonil) and Emerald (boscalid)) on Tuesday June 28.

We are now closely monitoring the amount of dollar spot that has infested the plots to determine the approximate timing of a second application of fungicide.We have also completed replacing close to half of the irrigation heads in the Rainbird section of the research station.

If anyone is interested in seeing any of the research going on at the horticulture research station, feel free to stop by and don't forget that the 2009 All Horticultural Field Day is August 6th.