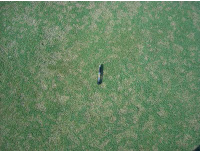 The time for the second application of fungicides on the new ​bentgrass research at the ISU horticulture research station has arrived. Chris Blume and I applied the curative, second treatment of Emerald® (boscalid) and Daconil® (chlorothalonil) today, August 18, 2009. The new bentgrass research is focusing on the susceptibility of different cultivars of bentgrass to the disease dollar spot. In the study, each plot is split, one side receiving no fungicides, while the other is treated with both a preventative and a curative application of boscalid and chlorothalonil. This year has proven to be an excellent year for dollar spot out at the research station and many of our bentgrass areas are spotted with the disease.

The disease dollar spot is caused by the fungal pathogen Sclerotinia homoeocarpa. This disease commonly infects many of our cool-season grasses. Dollar spot is a particular concern on bent/poa greens where the sunken pockets may interfere with putting quality. Dollar spot can develop over a wide range of temperatures (55-80°F) when the dew persists for long periods of time (longer than 8 hours). Dollar spot is also considered a low nitrogen disease and is most severe on nitrogen deficient stands of turf.

The pathogen causes blighted, circular patches of turf which are similar in size to a silver dollar (rarely larger than 2 in. in diameter) on low mown areas, and up to 6 in. or more in diameter on taller mown areas. The blighted spots of turf often occur in clusters and may merge together to produce larger blighted areas as disease development progresses. Active 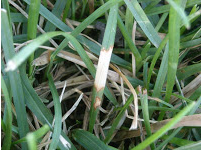 dollar spot infections produce a cottony white mycelia mass that is often evident on the turf during the early morning hours. When viewed under a microscope the mycelium will exhibit y-shaped branching and the presence of septum unlike the mycelia of pythium that are void of septum. In addition to the mycelia mass that may be visible, this pathogen also causes leaf lesions that have light tan centers and a red-brown margin. The leaf lesions of dollar spot are more commonly observed on taller turf species, such as Kentucky bluegrass, where the lesions take on the shape of an hour glass.

There are many ways to control dollar spot. One important management technique is to implement a satisfactory nitrogen fertility program. Nitrogen deficient stands of turf are more susceptible to dollar spot outbreaks. However, over stimulating with nitrogen may increase disease pressure from other, less desirable, diseases. Another option in control is to choose a less susceptible cultivar. Although there are no completely resistant cultivars of bentgrass, there are cultivars that are more resistant than others. For example, the cultivar Crenshaw® is far more susceptible to dollar spot than the cultivar Declaration®. Irrigation practices that limit the duration of leaf wetness will also help limit the occurrence of the disease. There are also fungicides available for the control of dollar spot. These fungicides often require multiple applications to effectively control this disease. Also, fungicides that are classified as site specific inhibitors have a high risk of resistance development and their repetitive use should be avoided. Some effective fungicides are Emerald®, Daconil®, Curlan®, and Tourney® along with many others.