We are testing a variety of plant growth regulator products and fungicide chemistries for efficacy on early spring seedhead control and possible disease reduction. This study is being conducted on a fairway mixed stand (50/50) of Poa annua and creeping bentgrass and has been initiated to show visual turf quality differentiation of the various products. Last season, test strips on a nursery green at North Shore Country Club in Glenview, IL showed considerably less disease when a plant growth regulator, Embark, was applied once during June. The early season applications as seen in the bar graph below for “Visual Quality” are at 21 and 28 days after treatments (DAT).

The first application was critically timed to coincide with forsythia bloom on April 14th. There are three Embark treatments all at the 40 oz/acre rate; Embark alone, Embark with Primo 0.125 fl oz/M and Embark with Primo 0.125 fl oz/M and also Signature 4 oz/M. This series of Embark treatments was only administered as a one time application due to a high amount of tip burn on the creeping bentgrass and chlorosis on the Poa annua. All treatments were within labeled rates. The result is poor visual quality of turf in this early spring period. However, all of the Embark treatments were excellent at eliminating all Poa annua seedheads (100% control). 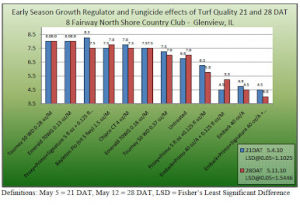 Two combinations of Proxy and Primo (5 fl oz/M + 0.125/M) were tested, at a 21 day interval with one including Signature at the 4 oz/M rate. However, neither of the two mixes resulted in greater seedhead suppression than any Embark combination (see graph). The visual quality for the Proxy + Primo + Signature yielded better quality at both the 21DAT and 28DAT (7 days after second application), but interestingly, there was no statistical differences between the treatment that contained only Proxy + Primo and any of the Embark treatments. 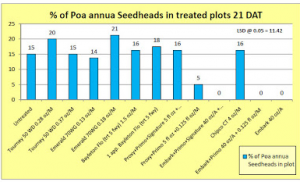 So, the question that is brought to my attention from the data is whether there is some sort of synergistic effects in mixing Proxy + Primo + Signature? On the flipside, we don’t see any of these effects in tank mixing with Embark, so this means we can rule out that it may have had something to do with a pigmented spray or not. Secondly, will the sacrifice in early season turf quality using Embark pay off when we get to the heat of the summer? And lastly, is it worth the dollars to apply fungicide this early for dollar spot when we have very low disease pressure? Over the next few weeks, we will likely begin to start seeing dollar spot and I will be excited to see how these early season applications of plant growth regulators and fungicides function in producing good turf quality and resistance to disease.