The main objectives of my research focused on the use of biochar as an amendment for sand-based turfgrass rootzones. Currently, peat moss is the most common organic amendment mixed with sand when sand systems are constructed. Peat moss increases water retention and nutrient holding capacity of the sand; however, peat moss is prone to decomposition over a relatively short period of time. Biochar, on the other hand, is very stable in the soil profile, and may prove to be a viable organic amendment for sand-based turfgrass systems. In this study, I used fast pyrolysis switchgrass biochar. 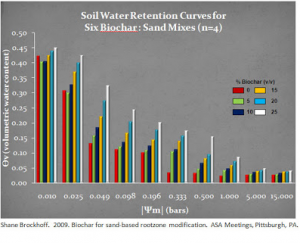 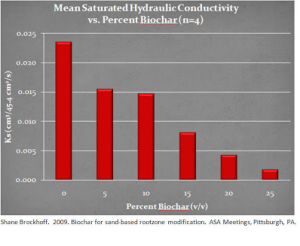 The table to the right converts the numbers to inches per hour. Six incher per hour is the minimum for USGA guidlines when constructing sand based turfgrass rootzones. Above 10% may be pushing the infiltration rate limit with biochar.

Rooting Depth - The rooting depth of creeping bentgrass was measured by growing ‘T1’ in growth tubes with 30 cm sand and biochar rootzones on top of pea gravel. The tubes were sliced open after 110 days of growth, and the depth of rooting was measured (picture below). This pattern of rooting depth was consistent throughout replications. The far left treatment in the picture is 100% sand, and the far right treatment is 25% biochar; increasing in 5% biochar increments at each treatment level from left to right. Biochar amounts above 10% show inhibitive effects on rooting depth of creeping bentgrass. (Biochar percentages are on volume-to-volume basis). 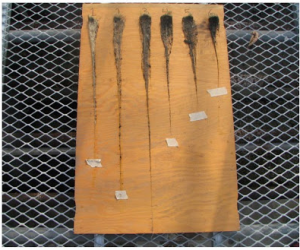 Iowa State Turfgrass is attempting to lead the way in the biochar discussion for the turfgrass industry. We would love to hear any feedback you may have on this topic.