Although you might not have been aware, Central Iowa had quite the streak going. June 6 was the last time the nighttime temps went below 60 degrees…that is until last night. Most of the state was greeted to early morning temperatures in the low to mid-50’s this morning. Some northern locations even saw temperatures dip in the 40’s. A cool reminder that fall conditions and improved growing conditions are upon us.

The weather this summer has been unusual to say the least. Most of the readership would probably use a different adjective to describe the weather but I’ll stick to “unusual” (This is a PG rated blog site after all). The consecutive day’s streak of nighttime temperatures above 60 degrees officially ends at 79 days. This falls just short of the record set back in 1983 when Central Iowa ran up a streak of 81 days. Good bye and good riddance. Don’t come back until next year.

Even with the cooler temperatures there are still disease and insect pressures that continue to cause problems. We have quite a bit of type II fairy ring working at our research station. Type II fairy rings have only a band of dark green turf, with or without mushrooms present in the band. On areas that are mowed frequently (greens and tees), mature mushrooms may never be observed but the "button" stage may be present at ground level. These rings have coalesced together and cover a fairly large area of turf but they have yet to cause any damage. 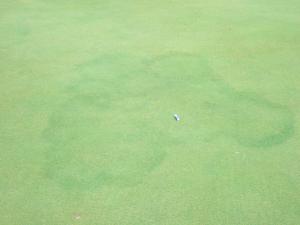 We also have noticed a tremendous increase in bird activity lately as they hunt after black cutworms that are feeding on our green and fairway height creeping bentgrass. I was able to find this sample by digging through a wedge I sampled from a putting green. I was surprised to observe just how deep into the soil profile the tunnel went. 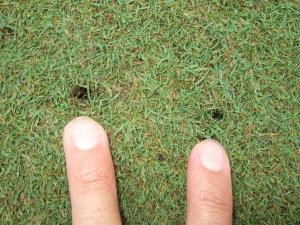 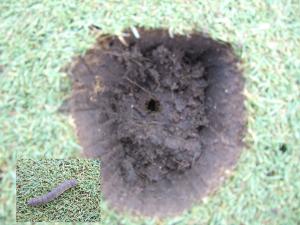 Sand bunkers continue to make news as a Connecticut man was arrested in part for taking a joyride on a golf course which caused an estimated $10,000 worth of damage. Maintenance workers arrived at work to find a car in the greenside bunker on the eighth hole. There hasn’t been any word if local rules deemed it a waste bunker allowing golfers to ground their club. Maybe we can get a ruling from the PGA on this.