A couple of weeks ago, I posted some information on Bermudagrass on sports fields and lawns.  At that time I asked for anyone from the golf course who is seeing it to contact me.

The following pictures are from Jim (no last name on the e-mail) from Keokuk Iowa.  They are from holes 1 and 2 on the local golf course of bermudagrass going dormant around the greens.  This is the first report I have had from a golf course.  Keokuk is along the southern border where bermuda would be more likely.  Is anyone in central Iowa seeing it on the course. 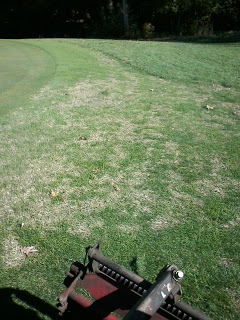 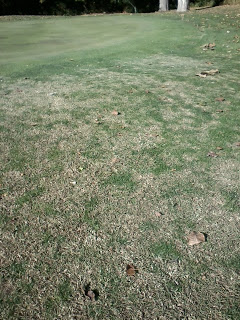 One of the big changes going on in the Upper Midwest turf industry is the increase in Bermudagrass (Cynodon dactylon).  This warm-season grass was not a problem in past years because it would winter kill each year.  In fact, I tried several times unsuccessfully to grow it here, with the exception of the steam lines on campus. Even in the most protected areas around campus, it would not survive the winter..  Now, we are seeing it in lawns and sports fields and it has been surviving because of the milder winters of the last couple of years..

I have not had any reports from golf courses.  If any of you working in golf are seeing it, send me some pictures.

The following pictures are from Eric VanGinkel of the Iowa Cubs.  Eric is also working on the Dowling High School baseball field.  The baseball field has the most Bermudagrass in it of any field that I know of in central Iowa.  The Bermuda is just going dormant and will be completely dormant in a couple of weeks.  I'll try to get some followup pictures at that time.

These pictures are from Oct. 23, 2013.  In the first one, you can just pick out the Bermudagrass as is begins to go off color.

Notice the long stolons spreading out over the track. 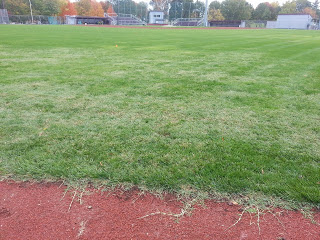 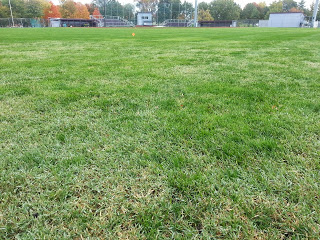 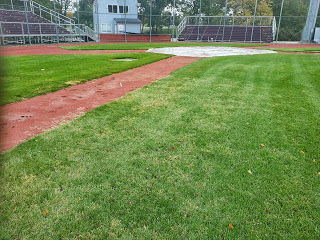 It will be interesting to see what happens if we get a normal, cold winter this year.

I have been doing plant walks on Iowa State Campus with students in the Hort 351 lab for 34 years before this fall.  I have never found bermudagrass on campus, with the exception of that which was planted on the steam tunnel a few years ago.  But outside of the very warm soil on the steam tunnel, our winters have been too cold for it to survive.  However, this fall, in my 35th year of doing this, there is bermudagrass that is not on the steam tunnel.  It is located in front of the genetics building.  Spence Nelson, president of the turf club, found it this morning.  The first picture is of the patch of bermuda and the second one is of a stolon that he brought in from the patch.  Notice that the bluegrass surrounding it is still dormant in mid September.  We went more that 70 days without significant rainfall.  Just this week, we had one half inch.  Hopefully we will get more tomorrow.  This shows how much better adapted warm-season grasses like bermuda are to drought.

There have also been several reports of bermudagrass in lawns and sports fields in central Iowa (see earlier posts on this subject).  While this is great for teaching, it can be a serious weed problem in our cool-season turf.  It will be interesting to see if it continues to survive our winters over the next few years. 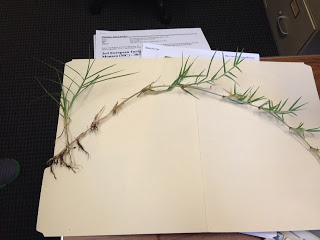 The two pictures below are from Rob Elder of Omaha Organics out of Nebraska.  These are very long bermudagrass stolons, longer than anything that I have seen in Iowa.  If anyone has observed bermuda north of the Ames/Des Moines area, let me know.  I am interested in how far north if is occurring. 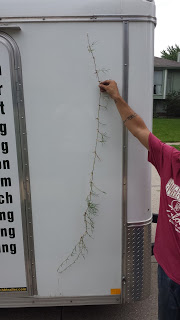 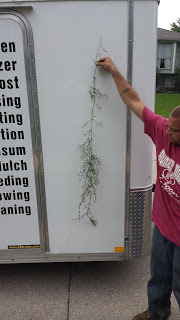 I received the first picture from  Rob Elder of Omaha Organics.  It is a stolon of bermudagrass Cynodon dactylon.  As is the case in central Iowa, this is unusual for the Omaha area.  Not long ago, you would not have found this species in that area because it would die each winter due to the cold weather.  It is now surviving the winter. 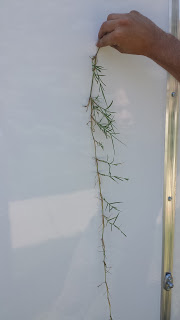 How can you tell it is bermudagrass?  While the long stolon is a pretty good clue, there are other species with stolons, so you have to look close at its characteristics.  The first clue is vernation, as pictured below.  Vernation is the way in which new blades emerge from the sheath.  Bermuda is folded like the grass on the left, while Zoysiagrass is rolled like the grass on the right.  Creeping bentgrass can also form a stolon like the one above. 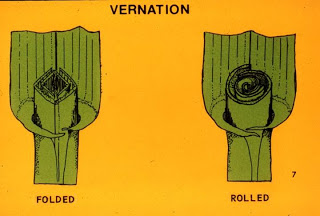 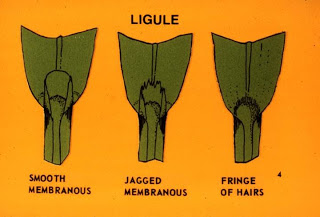 Here are two actual pictures of the hairy ligule of bermudagrass.  If the grass that you are trying to identify has a membranous ligule, it will likely be a cool-season grass.  If it is a warm-season grass like bermuda or zoysia, it will have a ligule that is a fringe of hairs. 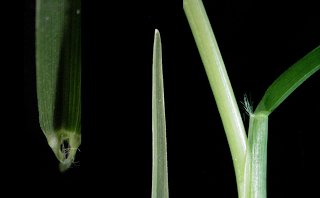 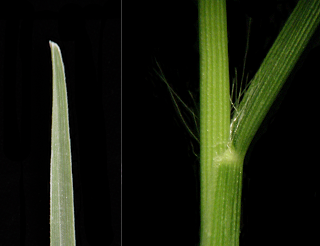 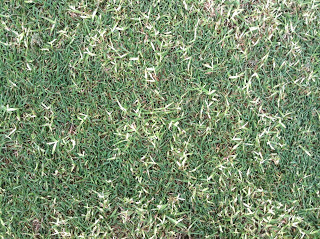 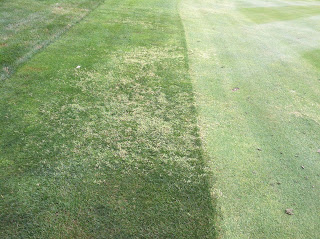 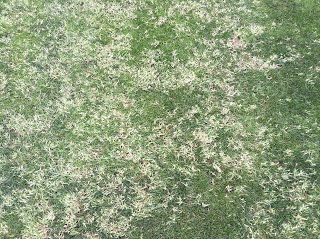 Here is some additional information on the bermudagrass on the Dowling High School baseball field in West Des Moines, Iowa.  The pictures are from Eric Van Ginkel of the Iowa Cubs, who is involved in the care of the field.  It shows the problem of bermudagrass stolons encroaching on the infield.  This is not a problem with the Kentucky bluegrass or perennial ryegrass, because neither has a spreading rhizome.  If any of you involved in sports turf management have noticed this on your fields recently, it is likely either bermudagrass of Zoysiagrass.  While Zoysia is more common in Iowa turf, the bermudagrass is increasing in the region and has the most aggressive stolon growth of the two species.  We are also seeing more of it in Iowa lawns.  Watch for stolon growth over the sidewalks and drive ways. 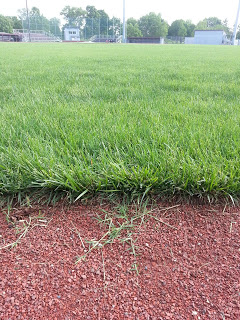 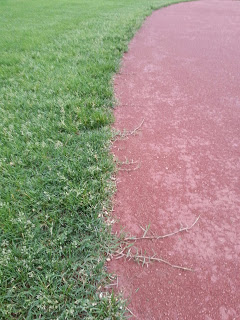 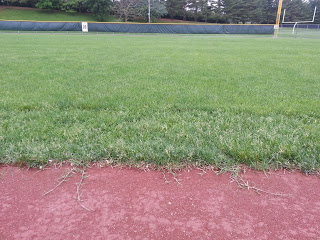 On September 18, 2012 I put up a post from Eric Van Ginkel showing a large amount of bermudagrass (Cynadon dactylon) on the Dowling high school ball field in West Des Moines.  The picture below is from last fall.  The bermudagrass is the lighter colored grass. 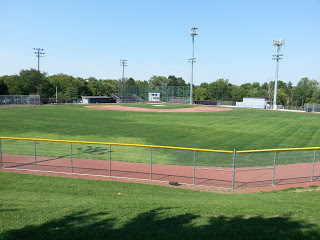 I stopped out at the field on June 7 to see how the bermuda had overwintered.  Here is a picture of  the field from June 7.  The bermuda has overwinetered well and is blending in well with the Kentucky bluegrass.  I'll try to get a picture again this fall to see if the bermudagrass has increased or decreased over the summer. 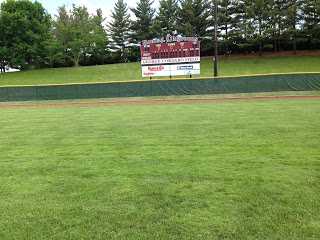 Since I posted the information on the amount of Bermudagrass showing up in Iowa, I have had a number of questions on how to kill it.  Roundup is the standard answer, but it is very hard to kill.  I have also heard from former students in Bermudagrass country about its control.  Below are two recommendations.  Notice that these come from other states and that pesticide labeling and recommendations vary by state.  Check labels for use of these products in your locations.

The first is as follows:

In our region, we use a combination of  Roundup and Turflon (Triclopyr) Ester.

(You can also find a number of articles on the internet about using Turflon Ester to control Bermudagrass.)

The second from another location includes Roundup and Fusilade in a tank mix, followed by Tupersan.

The aggressive way of killing Bermudagrass is to apply Roundup at 4 oz/1000 ft2  with Fusilade at 2 oz/1000 ft2 in a tank mix combination.  It may take a repeat application

Again, check label recommendations for your area before using these approaches. 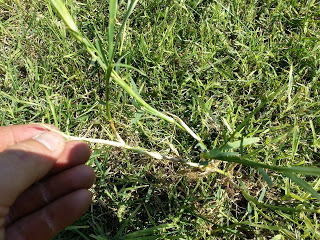 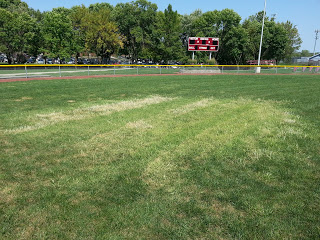 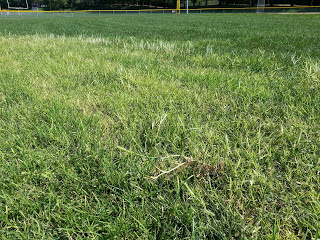