Recently I have been getting e-mails from friends and family back in Iowa telling me about all the weed pressure this season from the wet weather conditions. Their messages got me thinking about some of the weeds around here in Hong Kong and I thought it would be interesting to share about three different types of weeds that are an ongoing battle for us here at the Hong Kong Golf Club.

Goosgrass Eleusine indica
Goosegrass is a summer annual grass, which grows as a perennial here in our subtropical climate. Goosegrass pressure is intense on nearly all parts of the course and grows very well in compacted and high traffic areas. Recently, a pre-emergent herbicide plan has been implemented using Barricade and we have had great success. By using this pre-emerge program in the fairways, roughs and all other major play areas, we have saved a massive number of man-hours that were devoted to hand pulling weeds. We still have a crew of who spends a majority of their day walking the fairways with a weed removing tool and a trash bag trying to control the Goosegrass. At the end of the day most of the managers have filled up the back of their carts from pulling Goosegrass on their courses whenever they see a troublesome clump trying to take over. 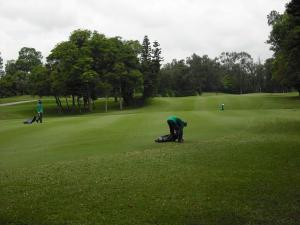 Water Hyacinth Eichhornia crassipes
Water Hyacinth is a water dwelling weed that is incredibly invasive and can destroy the make up of a pond or lake. It quickly covers the entire top of a body of water, cutting out sunlight to lower levels, and sucks all the oxygen out. There was an article in the August edition of Golf Course Management (pg 40) about a new insect that they believe will help control populations of Water Hyacinth. Unfortunately, the insect is just being released in Florida and I do not know if it will ever be made useful here in South East Asia. Our current control method is again, manual removal. Every few months our landscape team will go in and remove all the Water Hyacinth from this pond. Unfortunately, if you leave just one leaf, it will be completely covered again. We are keeping our fingers crossed it does not invade other ponds on the course. 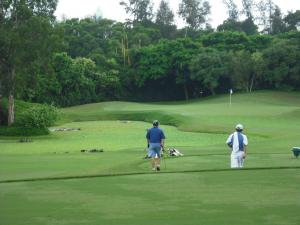 “Creeper” Mikania micrantha
Chinese Creeper, or more commonly known just as “Creeper” is a weed that has most of Hong Kong in its grips, literally. Creeper is a perennial weed that quickly grows and overtakes trees and all other vegetation. It smothers them from the light and eventually kills them. This vine can be seen taking over forests in the mountains and if anything sits for too long, creeper will eventually overtake it. Our arboriculture team regularly removes the vine from our tree lines here at the golf course. They do a great job keeping it from overtaking our natural areas, but it is a never-ending job. There are some chemical controls for it, but it is easiest and safest to just remove by hand and to try and keep populations at a minimum so it doesn’t get out of control. 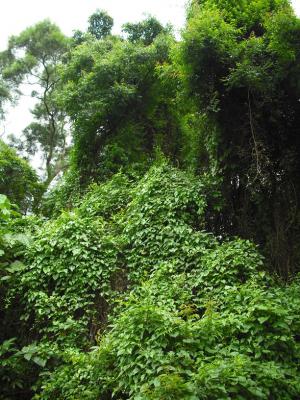