It forms patches of a light green, dense turf in the spring and fall when there is enough moisture.  It is best adapted to wet shaded conditions and may be included in seed mixtures for that environment.  Unfortunately, it often grows out into full sun areas.    It is very intolerant of heat and drought and turns brown in dry summers.   It is not dead, but dormant and will recover quickly when it cools down and there is more moisture.

Kentucky bluegrass has underground stems called rhizomes, whereas Rough bluegrass has stolons.  It has a boat shaped leaf tip and a folded vernation like the Kentucky.

It is often mistaken for a disease problem in Kentucky bluegrass.  One needs to look at it closely to see the stolons. 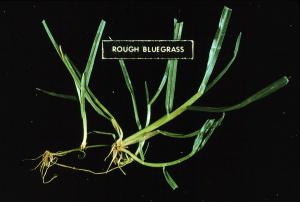 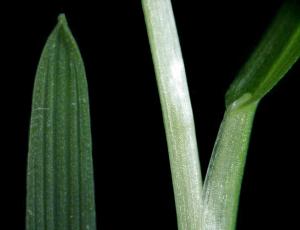 It has a boat shaped leaf tip and folded vernation, like Kentucky bluegrass.  It's membranous ligule varies from short to quite pronounced.  In this picture, the ligule is short. 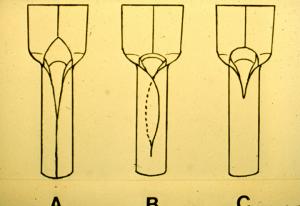 It sheath is like the middle picture, split part of the way down, whereas Kentucky bluegrass is split all the way to the node.  (ASA slide set) 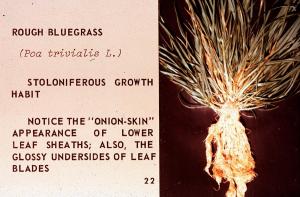 Lower sheaths may take on an onion-skin like appearance.  (ASA slide set) 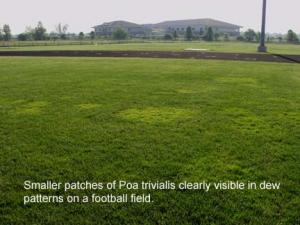 In spring it appears as light green patches in the turf.  (Taken from web, source Dr. Zac Reicher) 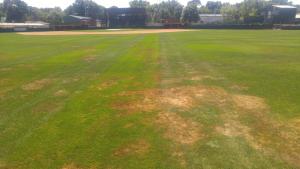 In hot dry weather it may turn reddish or a light purple color and then turns brown.

There is no selective control for it in Kentucky bluegrass.  You either need to live with the brown spots in summer, or wait until it recovers, kill it with glyphosate (Roundup) and seed back into the dead spots with Kentucky bluegrass.  Roundup will not kill it when it is dormant.  Sufficient irrigation in midsummer may also prevent it from going dormant.