Meteorologists in Iowa are calling it the coldest winter on record in the last 35 years, but what does that mean for my turf? Is it still alive?

The statewide avg. temperature in the last three months was 14.7 degrees, well below the 22.1-degree normal, according to State Climatologist Harry Hillaker. In addition to the extreme cold, snowfall varied considerably acrosas the state. Western Iow received far less snowfall and had a higher frequency of days above freezing. This could raise more concerns because of the increased exposure to the elements.

Research from Hoffman et al., (2010) at the University of Massachusetts-Amherst found that annual bluegrass has a lethal temperature with 50% death (LT50) at an approximately 0.1F, while creeping bentgrass has an LT50 between -6 and -16F. These numbers are of particular concerns in relation to the 15 (Shenandoah) to 50 (Decorah) subzero days this winter across Iowa. Direct low temperature death has several factors that include hardiness level, freezing rate, thawing rate, number of times frozen and post-thawing treatment (Beard, 1973).

With hopefully the cold weather behind us and the last little bit of snow melting, we can start looking towards the 2014 growing season. The first step is to determine whether my greens or athletic field is alive. The best way to tell is by taking a soil sample (circular saw works well) and placing it in a greenhouse or inside where it will receive adequate light, nutrients, water, and warmer temperatures. If you begin to see new green color and growth within a few weeks, you should be fine.

The following pictures are from Brent Smith while visiting western Illinois. I feel with a little care and fertilizer in the spring these greens should be looking great by late May, early June. In some cases, it is just a guessing game, but there is enough green tissue in the picture to convince me that they will be good. If you have large areas without green tissue, alternative options may need to be considered (sodding or interseeding). 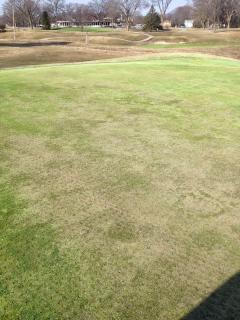 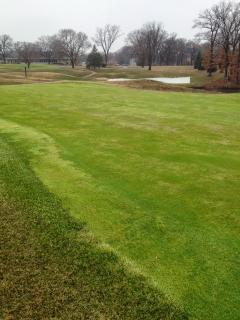 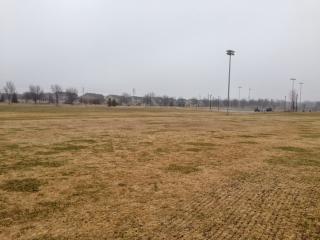 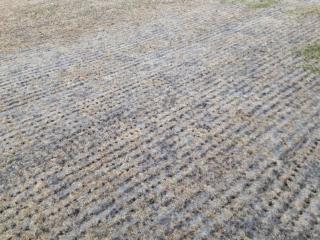 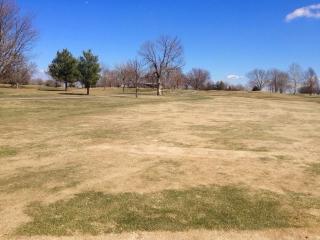