The following is from Kevin Hansen, a graduate student at Iowa State, who is working on his masters degree in professional agriculture.  It concerns his work with fraise mowing and establishment of sports turf areas.

My project centers around establishment of turf areas following fraise mowing (see earlier blogs).  I have been involved in the renovation of the football practice field at ISU and am conducting additional work on the process for my creative component.

The objectives of the research are:

1.  To determine the best establishment method for fraise mowing.

2.  To determine if covers are needed for spring establishment.

The study was initiated on April 7, 2014.  We pulled the tarps off on May 6.  I will be collecting data throughout the spring.

Here is the area right after fraise mowing on April 7, 2014.

The area after seeding and after tarps are laid. 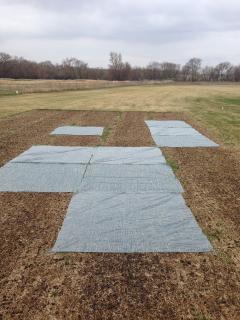 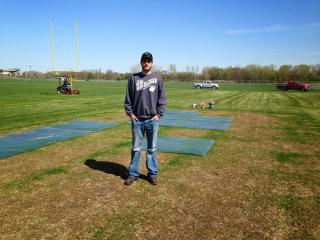 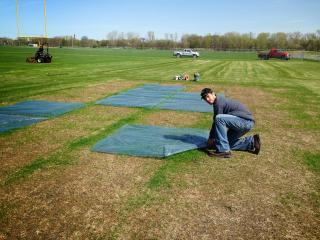 Tarps made a big difference initially. 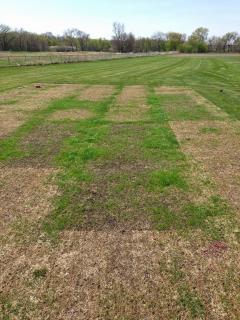 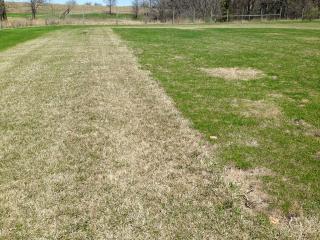 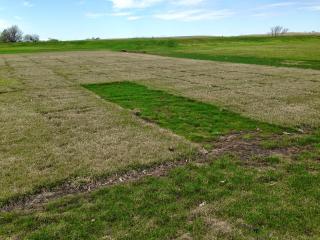 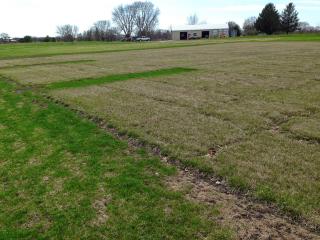 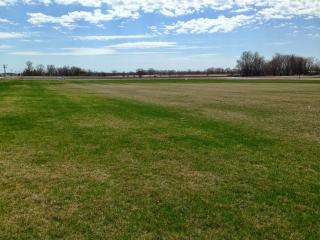 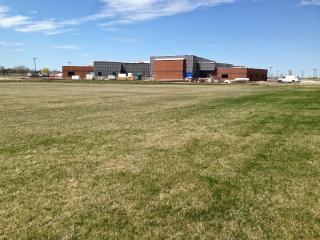 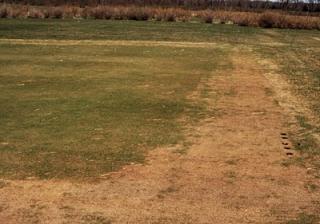 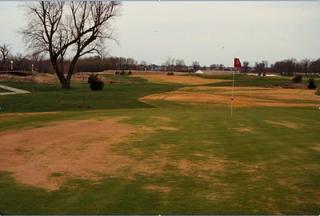 Desiccation on bentgrass (prior year)

Winter damage to turf can occur from a variety of causes.  These include diseases such as snow mold, ice cover, traffic, frost heaving, desiccation, and direct low temperature damage.  In recent years, desiccation due to mild conditions, lack of snow cover and drying winds late in the winter have been the biggest reason for winter damage in Iowa (see my blog on this site from January 2, 2012).  Snow mold is sometimes a problem (see blogs from March 11, 2010, Sept. 10, 2010, Nov. 27, 2012 and Dec 8, 2012).  The biggest concern this spring, however,  is likely to be direct low temperature damage.

This past winter has been one of the coldest in recent memory for most of us in the Midwest.  As Ryan mentioned in his last blog, the average temperature over the past 3 months was 14.7 degrees F as compared to a normal average of 22.1 F.  We also hit some very low temperatures during the last 3 months, with low temperatures on some days dropping below -20 F.  Records in Ames show that this winter was the ninth coldest in the last 141 years. The question as to how much winter damage we will see as the turf emerges from dormancy depends on the species grown on the site and on a series of complicated, interacting conditions that occurred during the winter.

Kentucky bluegrass (Poa pratensis) and creepging bentgrass (Agrostis stolonifera) tend to be quite tolerant of cold temperatures.  The fine fescues as well have proven to be quite tolerant in my experience.  Perennial ryegrass (Lolium perenne), tall fescue (Festuca arundinacea), and Annual bluegrass (Poa annua) are more likely to be damaged by low temperature.  The warm-season grasses are generally more susceptible to cold temperature damage.  Bermudagrass (Cynodon spp) is easily damaged, whereas Zoysiagrass (Zoysia japonica) and buffalograss (Buchloe dactyloides) are more tolerant.  It will be on the perennial rye, tall fescue, and annual bluegrass that I expect the most damage as the grass emerges from dormancy in this area.  Creeping bentgrass is very susceptible to winter desiccation, but the continual snow cover that we have had in most regions of the Midwest should prevent this from being a major problem this year.

An even more important determining factor in direct low temperature kill is the condition of the grass going into the winter and the conditions that occur in the localized area during the winter.  Seedling ryegrass and seedling tall fescue that were established late in the fall are particularly susceptible to cold temperature damage.  It is not unusual to loose late seedings of these species in years with less severe winters that occurred this year. Mature stands of these species survive cold temperatures much better if they harden off properly before extremely cold temperatures occur.  Snow cover during the winter tends to be a good thing, and I rarely see damage in cold winters when snow lasts most of the winter as it did this year.

If there has been intermittent melting, allowing water to settle in low areas, followed by a hard freeze, damage is more likely to occur.  This is particularly true of perennial ryegrass and annual bluegrass damage.  I have observed this type of damage a number of times over the years and I expect to see some of it this spring.

Damage to annual bluegrass is hard to predict.  This species is more sensitive to direct low temperature kill than is either Kentucky bluegrass or creeping bentgrass.  However I have seen years where I expected to see a lot of annual bluegrass damage and didn’t.  There have also been years when I didn’t expect damage and a lot of it occurred.  Again, it is a series of other factors that determine annual bluegrass damage.  These include the condition of the grass going into the dormancy and the combination of weather conditions that develop during the winter.  As cold as it was this winter, I am anticipating quite a bit of damage.  I am getting early indications from the Chicago that quite a bit of damage has occurred on greens and fairways where annual bluegrass is the primary species.  I’ll keep you informed on that as the spring progresses.  Winter damage to annual bluegrass is often quite localized due to variations in winter conditions.  Here in central Iowa, the annual bluegrass seems to be emerging from dormancy in good shape.

In the last two years, I have done a number of blogs on bermudagrass showing up in Iowa turf areas (Aug. 2, 2012, Sept 18, 2013, July 29, 2013, and June 17, 2013).  Another warm-season grass that has become a problem because of the series of mild winters in recent years is Windmill grass  (Chloris verticullata) (Sept. 19, 2013, July 3, 2012, Aug. 6, 2012).  Neither of these species was a problem up to about 5 years ago.  Both species are quite sensitive to cold temperatures.  It will be interesting to see if they survive this severe winter.  Windmill grass is a perennial, but it is also a very good seed producer.  I suspect that this grass is here to stay, even if a lot of the existing plants died during the winter because of the amount of seed in the soil. 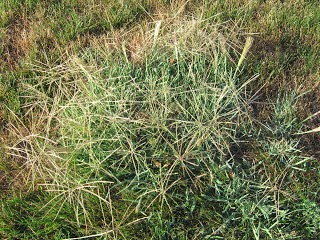 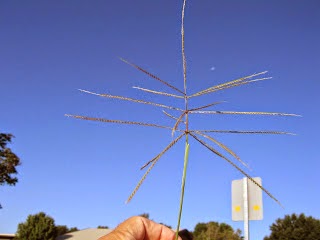 Bermudagrass on Iowa State campus in the summer of 2013.

Let me know what you are seeing as the season progresses.  I would appreciate any pictures that might be of interest to others in the industry.

The Iowa Turf Blog received a 2014 Super Social Media Award during the 2014 Golf Industry Show last week in Orlando.  The award is given by Golf Course Industry and Aquitrols. 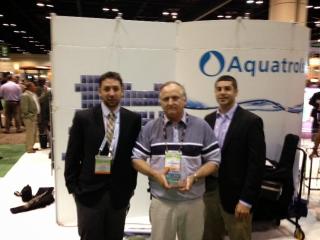 For the second year in row, an Iowa State sprots turf students was selected for the Toro Super Bowl internship.  There is only one of these nationally each year. This years winner is senior Josh Lemz.  He is in New Jersey now working on the preparation of the field for the entire week before the game.

This is a fantastic experience and I'm sure that we will have a lot of follow up pictures after the game.

This is Josh last week in San Antonio at the Sprots Turf Managers Association national meetings.  He is standing by his picture in the Toro booth at the show. 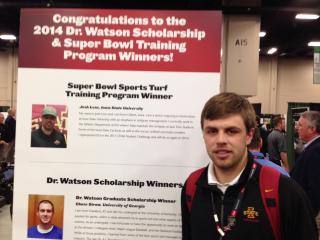 Here is some more information on the advanced turf class that will be offered this coming spring.  Let me know if any of you have any questions.

INFORMATION ON YOUR SPRING 2014 ONLINE CLASS!

We are pleased that you will be teaching HORT 451–using Blackboard Learn for the spring 2014 semester. Dates that we have listed for your course are: Monday, January 13, 2014 to Friday, May 9, 2014. Course website: http://agonline.iastate.edu/courses/s2014hort-451-xw- Please review and let me know of any corrections that need to be made by Friday, December 6th, 2013.

The book and course packet information listed on the Course Initiation Form was:

Notes from Brenton Center: If you have online course charges, please contact Amy Pilcher for information about how to report those expenses: apilcher@iastate.edu

**I am attaching the letter that will be sent out to all students enrolled in your distance education class. Please review the attached letter and get back to me with corrections before Friday, December 6th, 2013 or the letter will be sent out as is.

Unless specifically directed otherwise please have your students register in the following manner:

New students to Iowa State University have to apply for admission as a non-degree seeking student: http://www.admissions.iastate.edu/apply/nondegree.php(there is a $40 application fee)

Returning ISU students can register either through Access Plus or by calling the Office of the Registrar at (515) 294-1889 during regular business hours, Monday-Friday, 8am-4pm (CST).

To drop or withdraw from a course, students must use AccessPlus or contact the AgOnline Coordinator at agonlinehelp@iastate.edu.  Failure to attend a class does not constitute withdrawal and a student will be billed for the full tuition.

Electronic class lists are available to instructors on the web through ACCESSPLUS.  https://accessplus.iastate.edu/frontdoor/login.jsp

All students are issued an ISU ID number. This number authorizes students to use the ISU e-library facilities, Access Plus, and to establish an ISU NET ID, https://asw.iastate.edu.  Students in classes using Blackboard, need an ISU NET ID to log-on to the system.

Best wishes for a great semester!  If there is anything more that we can do to make your off-campus teaching more rewarding for you and your students, please let me or the other Brenton Center staff know.  Thanks!

College of Agriculture and Life Sciences Distance and Online Education