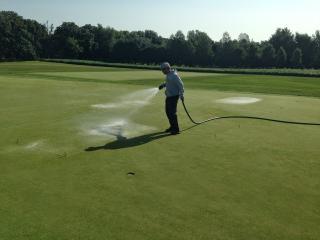 About two months ago, I noticed some damage on Penncross creeping bentgrass (Agrostis stolonifera) greens at Westwood municipal golf course in Newton, Ia.  The symptoms looked like the patch disease Take All, caused by the fungi (Gaeumannomyces graminis). Similar symptoms were soon observed at the ISU turf research station. The Iowa State Plant Insect Diagnostic Clinic (ISU PIDC) confirmed both of the areas for Take All.  At the same time, they did a nematode count and found counts over the thresholds that also may be involved in the damage. Westwood had 146 lance nematodes while the research farm had 762 ring nematodes.

I received a similar call from Hyperion Golf Club and upon further review and analysis; it was the same culprit (high Lance Nematodes: 470 and Take All patch). The University of Florida Nematode Assay Lab and ISU PIDC have also confirmed high stunt and ring nematode counts at Schaumburg Golf Club outside of Chicago. Talking with people in the industry, it seems like a few golf courses are dealing with comparable issues in the Kansas City area.

Last week, samples were run from 5x80 golf and country club in Menlo, IA. One sample was submitted from an area suspected of having nematode problems, and another from a “good green.”   The “good green” had very low count of 82-ring nematode, while the “trouble green” had 410 ring nematodes. Again, Take All runner hyphae were found in the sample. While the trouble green clearly had higher nematodes (5x as many) and Take All, we are still unsure of the relationship because 410 ring nematodes is not usually considered to be enough to cause damage.

The last portion of this blog will address how to take a nematode sample. Earlier in the year, we were advising to take a cup-cutter because of ease in looking for Take All runner hyphae.  However, after sitting down with the ISU PIDC we have created a more defined sampling methodology. The best way to samples is by preparing 10 to 20 "cores" of soil from the infected areas. This can be done by use a soil probe, soil-sampling tube, auger, or trowel to a depth of 3-5 inches. The 10-20 cores should equate to about two cups of soil. This composite methodology will give a more accurate count of the nematodes. There is some concern that using a cup-cutter plugs might result in missing the nematodes in the soil. Please also send the samples overnight mail and try to keep them in a moist environment prior to shipping.   The ISU PIDC’s web site is http://www.ent.iastate.edu/pidc/.

This week I have found several other labs who offer similar services. A and L Laboratories (Memphis branch), the University of Florida, Nematest (Lincoln) and Midwest Labs (Omaha) all offer assays for a nominal cost like the ISU PIDC. Regardless of where you send the sample, please send me the results (even at low nematode counts) because we are creating a workbook to monitor nematode counts around the state. If this is going to be a problem from the next 15-20 years, it would be beneficial to have a data trail.