The Toro Company has recognized Kevin Hansen, ISU Horticulture Senior, as the recipient of its annual Toro Super Bowl Sports Turf Training Program. In partnership with the National Football League® (NFL), Hansen will be on the field at the Superdome in New Orleans for Super Bowl XXLVII to assist the grounds crew for the biggest football game of the year.

Through the Sports Turf Training Program, Toro and the NFL's Super Bowl grounds team collaborate to offer a program aimed at enhancing the skills of emerging sports turf professionals. This program provides hands-on experience in establishing and maintaining safe playing fields. Kevin will learn from the legendary George Toma, a trusted consultant and advisor who has helped prepare the field for every Super Bowl game in history. Kevin will also work alongside NFL field director Ed Mangan, and the Super Bowl grounds crew on turf maintenance, logo painting, field preparation for media day, and halftime preparation and clean-up.

While at Iowa State University Hansen has gained valuable sports turf experience by working at Jack Trice Stadium under the direction of Certified Sports Field Manager Tim VanLoo, Athletic Department.  VanLoo and his entire crew with several horticulture students were recently recognized with the Sports Turf Managers College Football Field of the Year Award.  Hansen has also served as a summer intern for the I-Cubs with Chris Schlosser and the Green Bay Packers with Allen Johnson, CSFM.

Toro equipment and representatives have been involved in preparing the stadium and practice fields for the Super Bowl for over 40 years. Starting with the inaugural World Championship in 1967, the NFL grounds crew has relied on Toro for its expertise in preparing the game field and multiple practice facilities. In 2003, the organizations partnered to establish The Toro Super Bowl Sports Turf Training Program.

Congratulations to Kevin Hansen and all those sports turf managers, classmates, and advisers who will watch the Super Bowl this year knowing that one of our own is in the house. 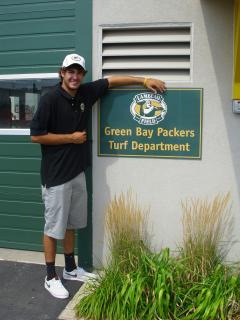 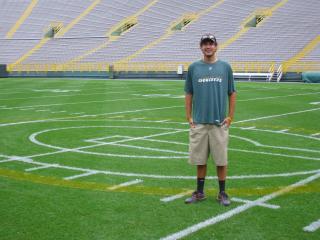 Kevin Hansen, one of our sports turf students, was chosen for the Toro Super Bowl Sports Turf Training Program this year.  As part of this, he will work for 7 days to help prepare for the Super Bowl and will be on the side-lines for the game.  Only one student nation-wide is selected for this honor.

This has been getting a lot of publicity locally.  Here are links to the Des Moines Register story and a press release by the university.

Watch for him at the game. 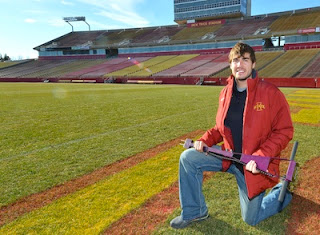 Kevin Hansen has been selected for the Toro's Super Bowl Sports Turf Training Program. Hansen, a senior in horticulture, will work alongside NFL field director Ed Mangan and the Super Bowl grounds crew on turf maintenance, logo painting, field preparation for media day, halftime preparation and clean-up at the Superdome in New Orleans for Super Bowl XLVII on Feb. 3. Hansen also scored a spot on the sidelines during the game.