Here are a couple of pictures of Windmill grass (Choris verticillata) from Larry Ginger of American Lawn Care in Des Moines, Ia.  This warm-season grass is fairly new to Iowa, but I get more questions on it every year.  As it matures, it will form a large, open seedhead that looks a little like a windmill.  It spreads by stolons and by seed and increases every year in this area, particularly along city streets and on south facing slopes.  The seedhead will detach from the plant at maturity and roll over the turf like a tumble weed to spread its seed.  This is the main reason that it has spread so quickly. 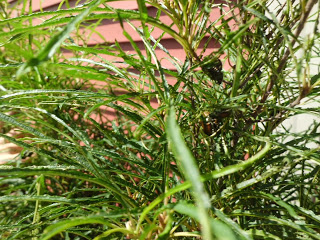 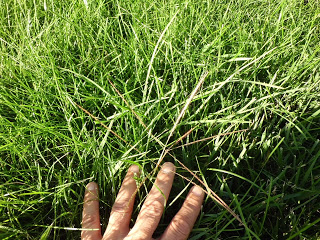 Roundup will kill it, but that will also kill the other lawn grasses.  Tenacity (mesotrione) is also labeled for it, but you will need to be persistent to completely remove it.

Search this blog for early articles on this species.

Here is a closeup of the seed head as it will appear in late summer. 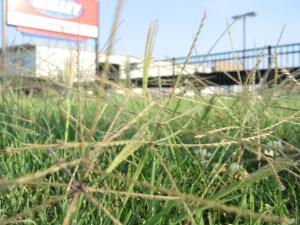 Here is a comment from Doug Schryver of Sterling, IL o

I just wanted to comment on your post about Windmill Grass. One of my duties at the Park District in Sterling Illinois is Turf Management and I’ve read where the only herbicide that is recommended for Windmill Grass is Tenacity. I live in rural Whiteside County (northwest Illinois) and the soil in our neighborhood is very sandy and I’ve noticed a lot of Windmill Grass in the area. About three years ago most of our front yard was Windmill Grass and I decided to try to rid the yard of it. Each spring I usually would use a de-thatcher on the yard until I realized that it was actually just mixing the seed from the Windmill Grass into the soil and opening up the soil to the seed, so I no longer de-thatch. I used Tenacity on the yard in three sequential applications 7-10 days apart and had good luck controlling the weed. At that point our yard was very thin in that area so the rest of the season I would physically pull any Windmill Grass plants that I would see along with collecting any seed heads that would roll into the yard from a neighbor. That fall I overseeded the area with Barenbrug 50/50 RPR (Kentucky Blue/Regenerating Perennial Rye) at 7 #/m and I was able to establish a very thick carpet of turf. Now I mow at 3” height of cut, twice a week and I’m very diligent about pulling any kind of weed and collecting any seed heads when I see them and fertilizing on a regular schedule to keep a thick canopy of turf to prevent the Windmill Grass from gaining a foot hold. It was a lot of work for about a year but now I’m very happy with the result! Some of my neighbors have noticed and have asked how I got rid of that pesky weed.