The 2016 ISU Turf Field Day is in the books, and attendees enjoyed perfect weather, informative talks, and great food. Speakers covered topics including: pollinators, athletic field safety, irrigation audits, putting green organic matter management, how to prune trees on a golf course, weed control for ground ivy, just to name a few topics. The group also participated in the popular and informative weed, disease, and insect walk, and finished with lunch and a trade show with exhibitors. Exhibitors provided demonstrations and answered questions after lunch. We look forward to a bigger field day next year with many new projects being underway!

Jack Trice is ready for the first game of the season, but getting to that point takes some time and hard work. I recently visited with Tim Van Loo Manager of Athletic Turf and Grounds for Iowa State University on what it takes to get Jack Trice ready. This year marks the 20th season since natural grass returned to Jack Trice Stadium. While much of the work is done during the summer, all of the painting is done just a day or two before the game. The grounds crew will mow the football field four times the week of the game, and they will always mow the same direction to make the light and dark stripes of the Kentucky bluegrass stand out. After a final mowing on Friday, the painting began. 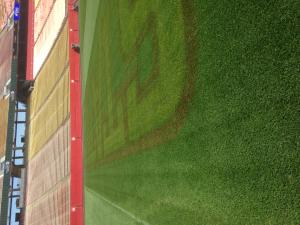 This year the field was painted last week for the Victory Day, so some of the logos are still barely visible.

Three colors are used on the playing surface at Jack Trice Stadium: white, cardinal and gold.  The white is applied first with the white lines of the field painted first then the numbers and hash marks. 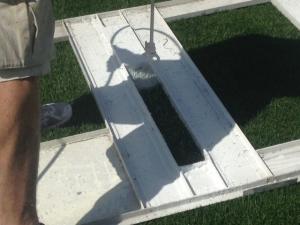 Care must be taken to not have paint drip when moving stencils. 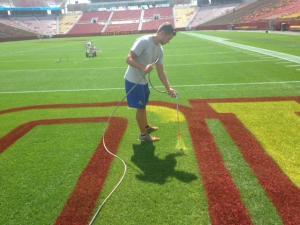 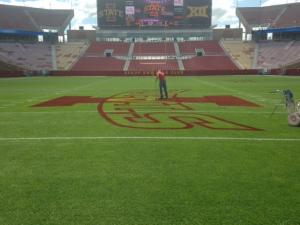 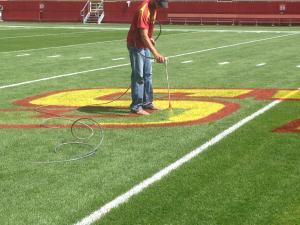 It will take this crew 55 man hours to mix the paint, paint the field, and clean up the painters.  They will use 50 gallons of white paint, 40 gallons of gold, and 40 gallons of cardinal paint. On game day the crew will arrive 6 hours ahead of kickoff to mow the field, put out sideline tarps, and help with any other project that may need to be done in the stadium. 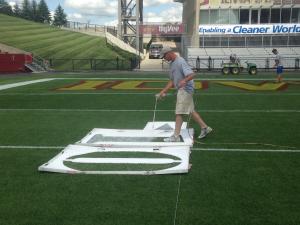 Tim Van Loo, Manager of Athletic Turf and Grounds for ISU, painting numbers for tomorrow's first game of the year. 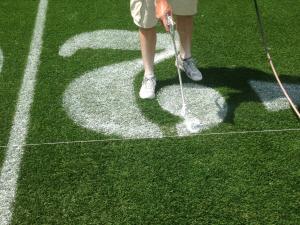 On a typical game day Tim estimates that around 600 to 700 people are on the field. After the game the crew will take screwdrivers and lift divots on the playing surface, similar to how a ball mark is fixed on a putting green, and the field will have the debris blown off of it. This process takes about two hours, allowing the crew to leave after Saturday's game around midnight. 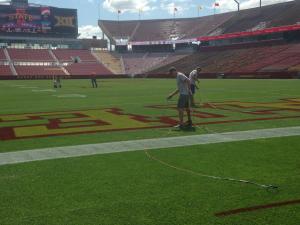 The February issue of SportsTurf Magazine features an interview with the current Sports Turf Managers Association President and Iowa State Athletic Field Manager Tim Van Loo as well as an article explaining micronutrients function, deficiencies, and healthy levels in turfgrass written by Dr. Nick Christians and myself. You can the February issue here: http://read.dmtmag.com/i/775572-february-2017/0 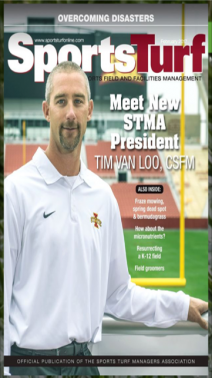 On the educational side, Dr. Nick Christians gave a presentation on Micronutrients for athletic fields. 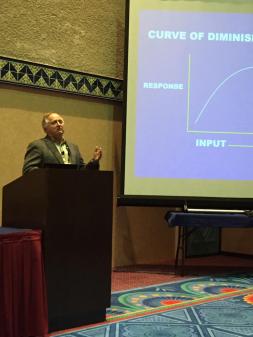 Students from Iowa State University recently competed in the Sports Turf Managers Association Student Challenge at the Annual STMA Meeting in Orlando at the end of January. This year's exam focused on turfgrass, weed, and insect identification, irrigation component identification, equipment troubleshooting, and an essay question. The teams finished second and tenth respectively in the four-year division. 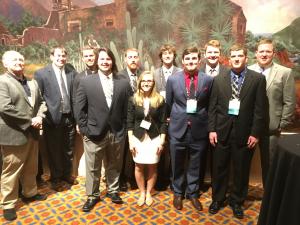 Pictured above are the students that took part in the competition at the STMA Annual Meeting with advisors Dr. Nick Christians and Dr. Adam Thoms.

In addition to the competition, scholarships were awarded to the top sports turf students. 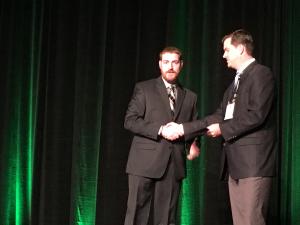 Mitchell Countryman of Iowa State received a SAFE Scholarship at the meeting.

This was a very good event for Iowa State to be a part of.

The annual Iowa Turfgrass Field and Demo Day will be Sept. 12, 2017 at the Iowa State University Horticulture Research Station 55519 170 St. Ames, IA 50010. Registration starts at 8:00 am with coffee and donuts. Education will begin at 9:00 a.m. with three area's of focus: Golf Course, Sports Turf, and Lawn Care. Attendee's will be free to travel between area's of focus. The event will showcase the newest cultivars of turfgrass and how they perform in Iowa, cultivation demonstrations, how to recover a putting green from the summer, new aerification devices, a session on what's bugging your lawn, how to prune a tree, a weed identification tour, a comparison of lawn fertility products, and ask the expert time slots. Also for those looking for Pesticide Applicators Certification and Education that is available for Categories 3-O, 3-T, and 3-OT. A lunch will be provided with registration. After lunch demonstrations of various turf equipment will take place, so feel free to check out the newest in turfgrass equipment. To register go to: https://iowaturfgrass.wildapricot.org/event-2604593  and register. We hope to see all of you on September 12! 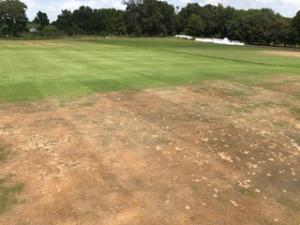 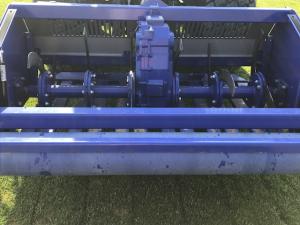 New methods of battling compaction will be on display at Field Day. 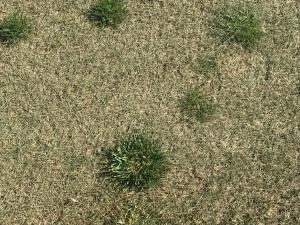 Check out differences in turfgrass performance.

The 2017 Iowa State Turfgrass Field Day in partnership with the Iowa Turfgrass Institute was held on September 12, 2017. This year’s field day was moved to September to better display the research results from the traditional July date. Attendance increased greatly with 225 registered attendees, up from around 80 last year. This year’s event also included a return of the turfgrass equipment and management demonstrations, with 21 companies taking part in the demonstrations.

The last hour of education included a turfgrass pest walk coving everything from turfgrass weeds, diseases and insects. Lunch was from Hickory Park, and demonstrations of equipment were from 1 to 3 pm. Look on the Iowa State Horticulture Homepage and Turfgrass Blog for the date of next year’s field day. We hope to see many of you in 2018! 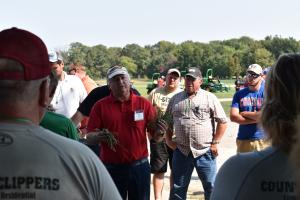 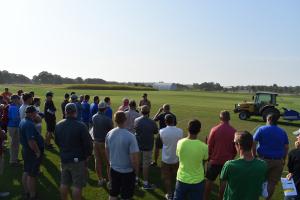 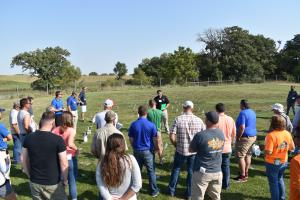 Dr. Adam Thoms presents the performance of various turfgrass and fertility treatments to the lawn care professionals in attendance. 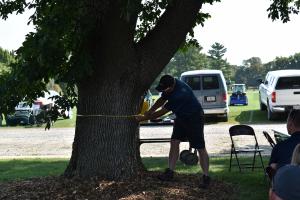 Not all was turfgrass at the recent turfgrass field day; Jay Goughnour measures an ash tree to demonstrate how to treat for E.A.B.