For the second time in two years, an Iowa State University turf student has been selected for Toro's Super Bowl Internship.  Last year was Kevin Hansen and this year it is senior Josh Lenz.   Only one student is selected each year for this honor from a nation-wide slate of candidates.  Josh works for the ISU athletic department and he is a full time student.  He will graduate in the spring of 2014.

Because of the cold weather, they are planning to put a bubble over the entire field to work on it the week before the games.

We will have him do a blog on his experience when he gets back.  Here is a picture of Josh at the ISU stadium. 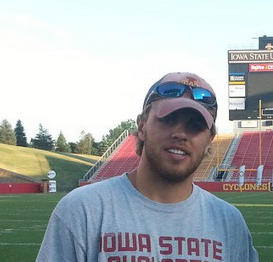