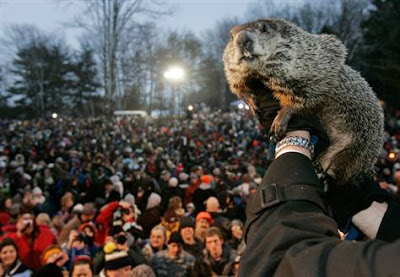 On the heels of a major winter storm that just pummeled the state and most of the country it’s fitting that today is Groundhog Day. The crowd that gathered at Gobler’s Knob in Punxutawney, Pennsylvania this morning witnessed Punxsutawney Phil make perhaps the most celebrated weather prognostication of the year.

Phil’s prediction this year you ask? You will be happy to know that Phil is predicting an early spring. Let’s hope he’s right. Now, when I was doing my background work on Groundhog Day, I was surprised to learn that there are other groundhog forecasters all across the U.S. While Phil may be the most notable, other furry forecasters include General Beauregard Lee, Buckeye Chuck, Wiarton Willie, Sir Walter Wally, Birmingham Bill, and Shubenacadie Sam, just to name a few.

Now, onto the winter weather update. A relatively mild fall gave way to snow during November and December. As of the end of January, central Iowa had received 27.5 inches of snowfall. That is 8 inches above the normal snowfall level at this point in the season. The month of January has accounted for 12.8 inches of our total snowfall this year and over half of that fell during a two day stretch during the 10-11th of the month. Although our year to date snowfall totals are above average we have experienced periods of melting in between the snowfall (See the graph below). 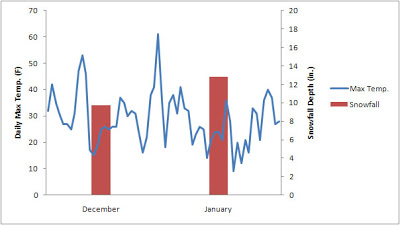 Whenever snowcover goes through melting and refreezing our turf can be subject to crown hydration. Crown hydration is one of the winter injury stresses that can damage our turf and unfortunately this process and measures to prevent it are not completely understood. A number of factors combine to cause this type of injury. In my experience shade and drainage are two important factors. There also seems to be agreement that annual bluegrass is more susceptible to crown hydration compared with creeping bentgrass.

If you are in doubt about the health of your turf, try to harvest some plugs and bring them into a warm environment. Incubate them for a week and evaluate the overall turf health. The picture below shows a couple of plugs I brought in from a golf course back in 2008. Notice how the plug on the right responded favorably to proper growing conditions. Unfortunately, the same could not be said for the plug on the left. While this was not necessarily the best of news, at least the golf course staff had a better idea what they might expect come spring and was able to begin planning. 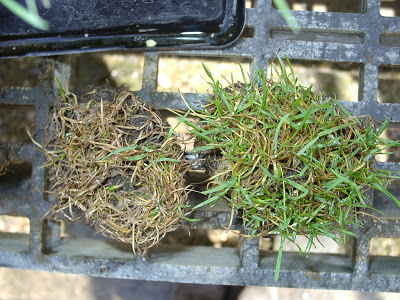 Next week I’ll be on the road reporting from the GCSAA Educational Conference and the Golf Industry Show in Orlando, Florida. Hopefully, I won’t have to worry about snow down there.