As you might expect, I have had a lot of questions on watering lawns recently. My standard answer is that watering is good and you should do it if you have no shortage of water and money.  That covers about 5% of the population.  The other 95% who don’t want to spend a fortune of water or are under water restrictions are generally looking for another answer.

If you have 1 to 2 year old sod or a new seeding from last fall or this spring, I would water.  This grass may not be mature enough to survive and watering will be worth the expense.  Mature Kentucky bluegrass lawns should be fine, however.

Let me begin by sharing my experiences in the last big drought in 1988.  In central Iowa, that drought was worse than this one.  Lawns went dormant in May and did not recover until well into September.  If you remember, we had pretty good spring moisture this year.  I mowed non-irrigated turf until nearly the end of June.  In 1988, I was amazed by how well the turf recovered in the fall, even on areas that had been dormant for 15 weeks or more and had been subjected to several 100 degree + days.

Kentucky bluegrass has an underground stem system called rhizomes.  These rhizomes are protected underground.  They have a series of swollen areas on the stem called nodes.  Each node contains a bud.  These buds have an incredible ability to survive drought and to regrow when moisture is available.   Most of the plant can die, but if the bud is alive the plant will come back.

In 1988, I looked at Kentucky bluegrass fairways on golf courses.  Where these fairways were not watered, cart traffic had worn them down to the soil surface.  I was asked if I thought that these would recover.  My answer in August of 1988 was ‘no’ I do not think they will make it and you will have to reseed.  I was wrong.  I went back and looked at these fairways in the fall and could hardly believe at how well they had recovered.

I am betting this year that we will be fine and that most people will be surprised by the recovery when temperatures cool and the rains return.  I have not been watering my own lawn and am counting on complete recovery.

Some lawns will be damaged.  There can be grubs or other insects that damage turf.  Some will lose perennial ryegrass and may be thin following recovery.  But Kentucky bluegrass lawns should be fine.

Another common question is “should I fertilize my lawn at the regular time”.  The answer is yes, go ahead.  Even if the grass is dormant, the fertilizer will not hurt it and it will help with recovery later (see the July 20 blog).  I will be fertilizing my dry turf areas in the middle of August.

I will continue to monitor lawns though the fall and put up some updates on the blog.  This morning, August 1, I drove around central Iowa and took some pictures of lawns.  We have had an inch and half or more moisture in the last week.  I am already seeing some recovery from that moisture.  Here are some pictures from this morning.

This lawn has been dormant by for about 6 weeks. 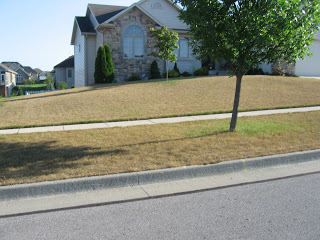 Here is one that has received some water, but is still under stress. 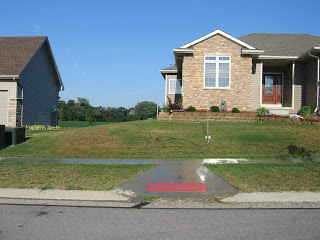 Not watered on the left, some irrigation during July on the right. 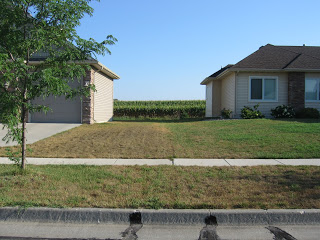 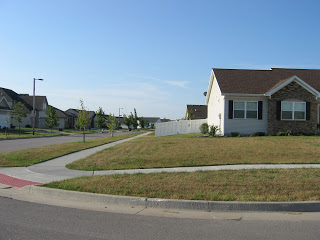 Not watered on left, fully irrigated during July on the right. 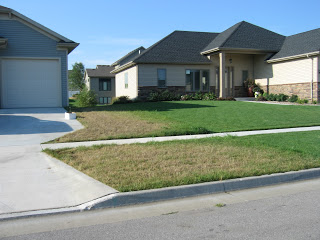