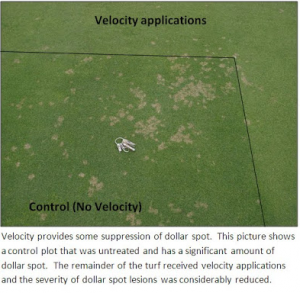 I had some Velocity plots setup at Hyperion Field Club this past summer that yielded very positive results. The plots were located on a practice putting green heavily infested with annual bluegrass. I made four applications of Velocity on 14-day intervals starting the beginning of June and concluding the middle of July at 2 oz/A. A fifth and final applications was made on October 1 at the same rate. This spray regime closely follows the protocol of the transitional conversion program.

Velocity does tend to yellow the turf even after one application. The color differences are even more noticeable in this study because of the untreated plots being directly adjacent to the treated plots. Velocity can be tank mixed with a chelated iron product to lessen the discoloration. 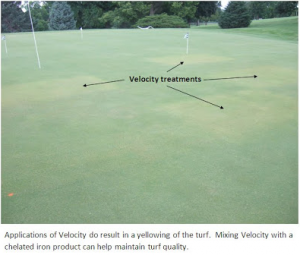 Late in the fall just before winter arrived, the plots that had received the Velocity applications were noticeably lighter green in color compared with the other plots. This could have indicated the beginning of the transition from a mixed stand of annual bluegrass/creeping bentgrass to solid stand of creeping bentgrass. 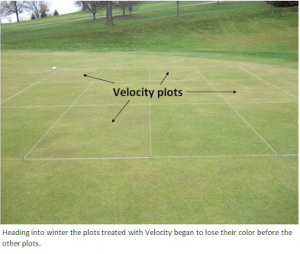 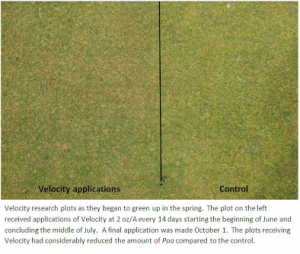 This study is entering its second year and will be conducted again this year to see if the results can be duplicated. More information about Velocity herbicide, including product research and additional literature, can be found by visiting the Valent website.