Dollar spot was the talk for the last two weeks of September, but now the night temps will hold off any development except for a possible warm spell left in the year. Now is the time to look back and evaluate our dollar spot information. We had a chance to evaluate our new fairway bentgrass variety trial during the highest disease pressure of the season. The borders of ‘Alpha’ and several entries were lighting up! It has been a long road for this trial. Twenty nine bentgrass
varieties were seeded last year and then reseeded this May. Now we have lowered the height (0.75 inches) slowly over the summer and finally we got some disease. 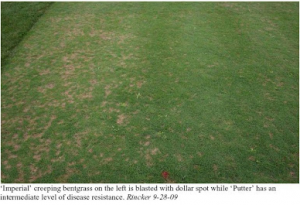 Next year we will learn (again)
Next year we will get a better idea for disease resistance of these varieties. So far our variation is still large and another years worth of data will be needed to determine the genetic resistance in the new varieties like ‘CY-2', ‘Kingpin’, ‘Shark’, and ‘007’. This data does show that varieties have been released with comparable resistance to ‘L-93’. Hopefully with more time we can say that there are a handful of varieties with greater resistance than ‘L-93’. In National Turfgrass Evaluation Program (NTEP) trials, ‘Declaration’ has shown promise. ‘Alister’ is actually a colonial bentgrass species. In previous research on Sunshine Course, colonial varieties are damaged by brown patch and weeds become a problem.

The “take home message”...
The goal of this research conducted here in Lemont and 11 other Midwestern universities is to determine how many fungicide sprays are needed when varieties with greater resistance are used. 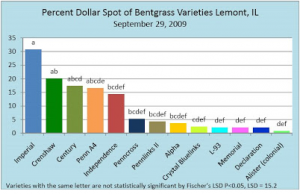 The L-93 Story at North Shore
This year at North Shore Country Club we set out treatments on a fairway strip of ‘L-93’. Only one application was made on May 14 and the plan was to see which treatments provided the longest control. Bayleton, Emerald, Daconil, Banner Maxx, and Chipco GT were all applied and we waited for dollar spot. Mid June came around, and no dollar spot – too cold. The beginning of July came and only a tiny bit of dollar spot. The beginning of August came around and finally dollar spot reached 1-3%in all plots. Fungicide or not, all treatments were the same for percent dollar spot incidence and plot visual quality.

No differences...
We found no differences in our statistics. What did we learn? Maybe May 14 is too early for dollar spot control. Maybe we can reduce our fungicide inputs by utilizing genetic resistance and eliminating one or two applications early in the summer. Our heads are already spinning around to design research in 2010.

Emerald for next year’s research...
So far our thoughts are to pick one fungicide and apply on selected dates from May through June or July on each ‘L-93’ and a bentgrass/Poa mixture. This will give us an optimal timing for first application to control dollar spot on two different turfgrasses. For now we will write down our thoughts and continue to analyze the research.