The 4th of July weekend brought rain across much of the state adding moisture to already saturated soils. Many parts of the state received upwards of 10 inches of rain for the month of June. Des Moines received 13.41 inches for the month which is well beyond their average of 4.57 inches. This ranks as the 4th wettest June on history, right behind 2008 when central Iowa received 13.45 inches. The average daily maximum temperature of 83.7 was slightly above the average of 81.8. The slightly above average temperatures coupled with the abundant rainfall provided plenty of opportunity for diseases.

The extreme wet conditions were especially conducive for slime mold development. In fact, slime mold often appears after heavy rains that were preceded by periods of dry weather (sound a little like our transition from May to June?). The slime mold I observed appeared overnight on a putting green following a couple days of rain. While slime molds are aesthetically unappealing, they are generally not harmful to the turf. 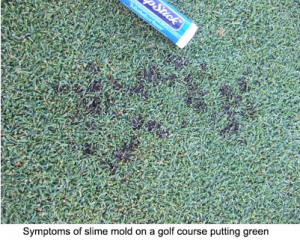 Most textbook and web references will describe symptoms of slime mold as round pustules that cover the leaf blade. The pustules can range in color from white, gray, purple, yellow, or orange. The bright colored pustules may appear first before turning darker in color, often within a few days. However, these descriptions best characterize the symptoms as they appear on taller mown turf. As you can see from these pictures, the symptoms of slime mold on green height turf appear slightly different from what is normally described. 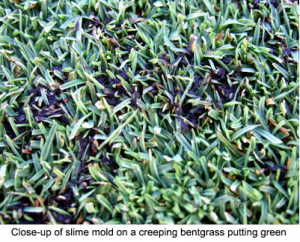 These samples were collected shortly after the morning mowing. It is likely that the pustules were present but were smashed and smeared by the mowers. At quick glance while walking across the green, the mold resembled grease that had been tracked from the mowers but appeared in a random fashion. A microscopic view shows the black pustules covering the ends of the grass blades. 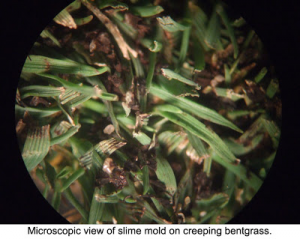 Because slime mold is usually short-lived and do not cause damage, fungicides are generally not recommended. Cultural controls normally include

washing the pustules from the leaf surface with water. However, given the excess moisture that can accompany slime mold, removing the pustules by gently brushing the turf may be a better alternative.

Let's hope we get a break from rain this week.