Here are some pictures of Quackgrass (Elymus repens).  This is one of most prevalent perennial grassy weeds in the Midwest.  It the hardest one to control in my experience.

The easiest way identify it is by its long clasping auricles wrapping around the stem from the collar. 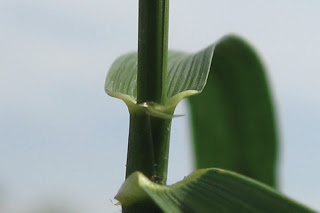 It also has an extensive rhizome system below ground.  It is the rhizome that makes it so hard to control.  While systemics like glyphosate (Roundup) can translocate down and kill the rhizome, the rhizomes are often so extensive that the entire rhizome is not killed and the quackgrass comes back from the buds on the nodes of the rhizome. 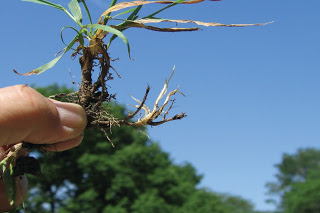 Here is a recent picture from the turfgrass research area.  We noticed that quackgrass was spreading into a sandy area from the edge of a creeping bentgrass green.  This demonstrates the ability of this species to spread into surrounding areas.

In the final picture, Dan has pulled up a section of the rhizome to show how long they can get.  There are no effective selective controls labeled for quackgrass at this time.  We did have Certainty (sulfosulfuron) from Monsanto up to about a year ago, but that product has been removed from the market for use in cool-season grasses.

Non-selective control with Roundup is still the best bet and even that will  require persistence.  The best way to get rid of it in your lawn is to hit it repeatedly with roundup.  Then, till the soil and sod over the spot, rather than seed.  It tends to out compete seedlings, but has a hard time emerging through sod. 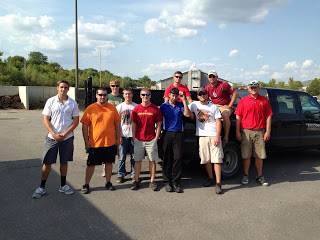