NEMATODES ON BENTGRASS IN IOWA

Nematodes on turf is a problem that we usually don’t worry about in Iowa.  This is generally considered to be due to our cold winters that keep the population of this pest in check.  That’s why it is such a surprise to find them in numbers sufficient to cause damage after one of the coldest winters in years.

A few weeks ago, Ryan looked at some damage on Penncross creeping bentgrass (Agrostis stolonifera) greens at Westwood municipal golf course in Newton, Ia.  The symptoms looked like the patch disease Take All, caused by the fungi (Gaeumannomyces graminis).  Further tests at the Iowa State University Plant and Insect Diagnostic Clinic showed high numbers of lance (146 nematodes/100 cubic centifmeters cc) and stunt(144/ nematodes/100 cc) and some runner hyphae in the roots of the Gaeumannomyces.  It appeared that the nematodes may have weakened the turf and allowed the fungi to infest the plants, although we don’t know that for sure.

When symptoms of Take All Patch showed up on one of our research greens at Iowa State last week, we submitted samples to the Plant and Insect Diagnostic Clinic.  We didn’t expect nematodes because the damage is so rare here, but it turned out that we had 762 ring nematodes/100 cc and again this was found in association with Gaeumannomyces runner hyphae in the roots.  This is a sand-based green established with A-4 creeping bentgrass.  The damage appeared during an extremely wet period when the sand was nearly saturated.

A check of the internet for threshold levels of these nematodes shows a lot of variation around the country.  However, the specialists at the Clinic, feels that these levels are high enough to cause damage to creeping bentgrass in Iowa.

We plan to follow up with a field study on the area that will include both nematode and Take All control products in separate plots and in combinations.  We will keep you posted over the summer on what is happening.

If any of you suspect that you have this problem, let us know and submit a sample to the Clinic.  Their web site is http://www.ent.iastate.edu/pidc/. 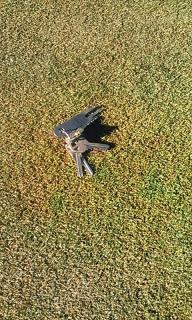 Ring nematode under microscope at the Plant and Insect Diagnostic Clinic. 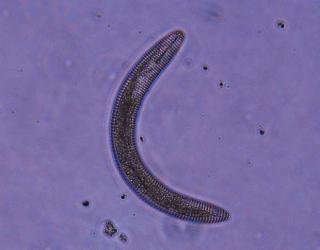 Ring nematodes in the samples that we submitted to the lab. 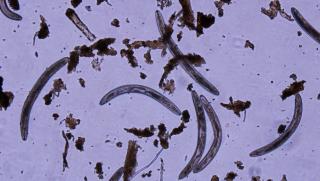